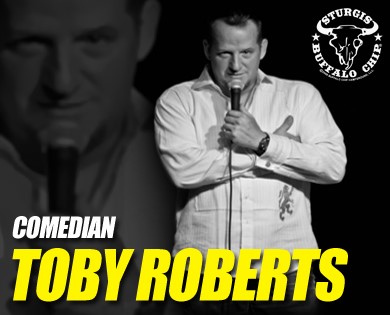 Toby Roberts, the critically acclaimed “Bad Boy” of the Northwest, makes his hysterical Buffalo Chip debut during the 2013 Sturgis Rally.

Toby’s delivers sidesplitting anecdotes in a storyteller style that’s beloved by comedy fans from across the spectrum. His hilarious subject matter is always current and heart felt, and will leave audiences at the Sturgis Campground wishing for just one more story. It’s this charming and engaging delivery that has earned Roberts such accolades as 2009 “Destination Vegas” Comedy Competition winner and 2012 Shades of Laughs International Comedy Competition champion.

Toby tours regularly, logging over 110 shows in the last year. And when Toby isn’t performing an extensive number of gut-busting shows for local fans, he takes his act overseas to perform for American troops around the world.

“Toby Roberts could make a dead man laugh,” says Daymon Woodruff of the Legendary Buffalo Chip. “If he could just him to listen to him first.”

Don’t miss the chance to bust your gut with the unusual tales of Toby Roberts at the free access CrossRoads at the Chip during the 2013 Sturgis Rally!