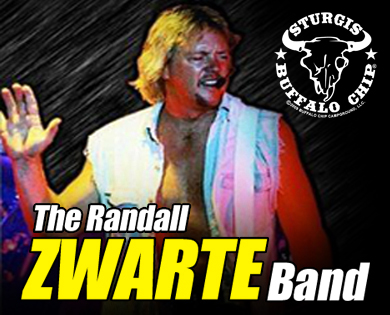 The Randall Zwarté Band joins an incredible list of diverse Sturgis concerts taking place during the 2nd annual Friday Fest at the Legendary Sturgis Buffalo Chip. And this band’s thrilling performance is sure to fire up the Sturgis Rally crowd on Friday, Aug. 2! Join Zwarte as the band films their live 2013 DVD from the Buffalo Chip’s main stage.

The band, known to fans simply as Zwarté, has released an impressive 12 albums during their 20-year career.  Songs like “Lucy,” “Loco P.D.” and “Lizzy” are favorites among die-hard fans.  But when the band released “Sturgis,” arguably the unofficial anthem of the Sturgis Rally, they truly became a household name for rally-goers.

Although Zwarté’s hundreds of thousands of digital downloads are nothing to snub your nose at, it’s their heart-thumping live shows that remain their strong suit. To that end, the band is constantly touring—touting a total mileage large enough to encircle the planet over 62 times!

Zwarté’s performance during Friday Fest rounds out a spectacular day of events and Sturgis concerts leading up to Queensrÿche. Don’t miss your chance to create legendary memories at this legendary party. Reserve your passes today!