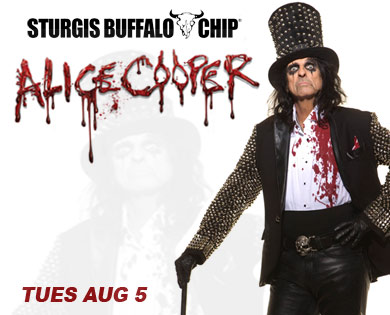 Get In on the Guts, Gore and Good Times during another Great Night of Sturgis Concerts at the Chip

The master of shock rock, Alice Cooper, will be bringing his dark theatrical stage show to the Sturgis Rally for the Buffalo Chip’s 33rd annual August music festival. Cooper is touring the country with glam metal legends, Mötley Crüe, as part of their “All Bad Things Must Come to an End” tour, and both will be playing at the Chip for a wild night of Sturgis concerts you won’t want to miss.

Alice Cooper’s groundbreaking sound and stage show have rattled the cages of generations of fans, with music that has spanned over five decades. After being discovered by Frank Zappa in 1969, Cooper was able to bring his rock psycho-drama to the masses, with shows that featured such props as electric chairs, guillotines, fake blood and live snakes.

A huge catalog of hit songs including “School’s Out,” “I’m Eighteen,” “No More Mr. Nice Guy,” “Billion Dollar Babies,” “Under My Wheels,” “Welcome to My Nightmare,” “Elected” and “Poison” has served as the inspiration for countless heavy metal rockers who followed in Alice Cooper’s footsteps.

Alice Cooper’s remarkable career has earned him countless platinum records and sold-out tours, but he still stays motivated after over 50 years in the business. He has continued and recording new albums, and has even keep up with several side-projects including his “Nights with Alice Cooper” syndicated radio show.

What kind of tricks will the shock-rock superstar have up his sleeve when he brings his insane stage show to the 2014 Sturgis Rally? There’s only one way to find out. Reserve your place at the Chip’s August music festival today!