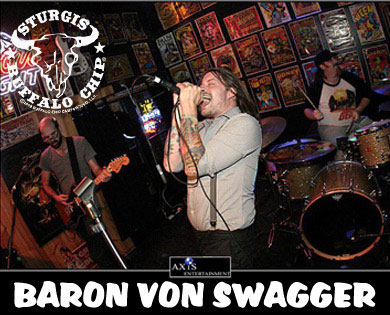 Feel the Slap of Southern Rock and Metal Swagger at the Chip’s Summer Music Festival!

Every good party needs some southern rock with a touch of metal swagger, and there’s no other band who can deliver it better than Baron Von Swagger. This Tulsa rock quartet will bring you its razor-sharp musicianship on the Chip’s showcase stages for the first time during the 2014 Sturgis Rally. Baron Von Swagger’s heart-pumping power and demanding stage presence makes its Sturgis concerts a must see!

Formed on New Year’s Eve in 2007 by four homegrown Tulsa friends, this band was practically born to party! With influences including Foo Fighters, Coheed and Cambria, Pearl Jam, Soundgarden, and Led Zeppelin, the band will provide a show that’s sure to thrill Sturgis Buffalo Chip audiences!

Powerful and energetic, Baron Von Swagger are a full-steam-ahead rock band that dishes up plenty of southern flavor and a non-stop live show. Don’t miss your chance to see these Sturgis Rally newcomers show off on stage during the Best Party Anywhere™! Check out the Chip’s daily event schedule reserve your passes now!

Tell us what you think below!

“You will love Sturgis and the people of South Dakota. We lived there for 14 years and miss it!” – Lori Kay