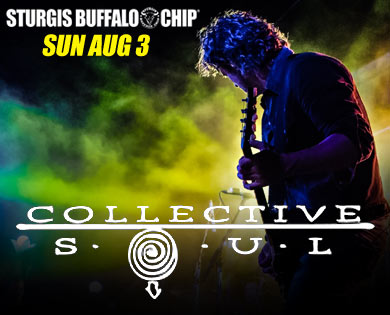 Enjoy 20 Years of Hits Live at their First Ever Sturgis Show!

Feel a wave of electric energy wash over you as Collective Soul brings its grinding guitars and catchy choruses to the Buffalo Chip’s 2014 Motorcycle and Music Festival. Don’t miss your chance to see the multi-platinum-selling quintet celebrate 20 years of success with an unforgettable Sturgis Rally debut prior to Lynyrd Skynyrd’s performance on Sunday, Aug. 3.

In its 20 years at the top, Collective Soul has practically seen it all. After exploding onto the post-grunge scene in the ‘90s, the band embarked on an arena tour alongside Aerosmith, secured a spot on the roster at Woodstock’s 25th anniversary and saw seven of its tracks shoot to No. 1 on the rock charts. But all these experiences aside, you can guarantee nothing these rockers have seen will compare to the roaring crowd the Largest Music Festival in Motorcycling™!

Hold on to your handlebars as Collective Soul’s three-axe lineup shows off the scope of its impressive catalogue. Familiar hits like “December,” “Shine,” “The World I Know,” “Run,” “Where the River Flows,” “Heavy,” “Tremble for My Beloved” and “Gel” will send you and thousands of Sturgis Rally goers on a double-decade ride down memory lane.

Whatever you do, you won’t want to miss Collective Soul’s milestone Sturgis concert on Sunday, Aug. 3. So get yourself in gear and get your passes for the Chip’s August music festival today!