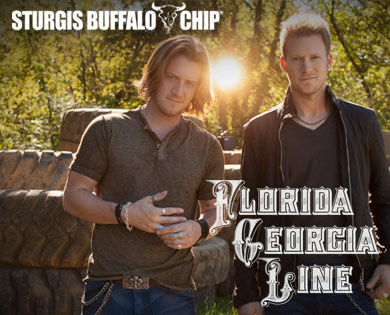 Contemporary country sensation, Florida Georgia Line, will make their Sturgis Rally debut during the Buffalo Chip’s 2014 Motorcycle and Music Festival. The singer songwriter duo comes to the annual August music festival toting an arsenal of such mega-hit songs as “Cruise” and “Get Your Shine On.”

The journey that took FGL’s Tyler Hubbard and Brian Kelley from Monroe, Georgia and Ormond Beach, Florida to the Largest Music Festival in Motorcycling™ during the Sturgis Rally has been nothing short of a whirlwind. The two met just a few years back while attending Nashville’s Belmont University. Tyler and Brian immediately discovered that their vocal blend was special, and began writing songs between classes on Tyler’s truck tailgate. They then started performing at the city’s writers’ nights, and gradually the clubs got bigger and the crowds larger and more enthusiastic. FGL’s shows didn’t just attract fans, they drew the attention of record producers.

“Instead of looking for a deal, we were looking for fans,” says Tyler. “So we went out there for two years and just did show after show. We knew that when the fans were there the labels would be there and that’s exactly what happened. That’s what set us apart, and that’s what led us to the best team in Nashville.”

FGL released their first independently produced EP, “Anything Like Me” in 2010. The recording included, “Black Tears,” a song penned by Tyler that Jason Aldean covered on his 2012 album, “Night Train.” Their second EP included the song, “Cruise,” which took Florida Georgia Line from a regional name to one of the most popular country acts to ever hit the airwaves. The song went to number one on the iTunes Country Singles Charts, earned double platinum status and helped secure the duo a spot on Luke Bryan’s 2013 “Dirt Road Diaries Tour.”

“’Party People,’ ‘Tip It Back’ and ‘Here’s to Good Times?’” laughs Daymon Woodruff of the Sturgis Buffalo Chip. “Yeaahhhhhhhh, gunning people down with high caliber songs like that means Florida Georgia Line will fit in just fine at the Chip. Visitors come to have a good time, and whether they’re the biggest country fans or not, I have no doubt Florida Georgia will provide everyone just that.”

Don’t miss out on the opportunity to see today’s hottest country acts at the best party of the summer during the Sturgis Rally! Reserve your place now to get in on some hard-driving country from Florida Georgia Line during the 2014 August music festival. It’s the Best Party Anywhere™.