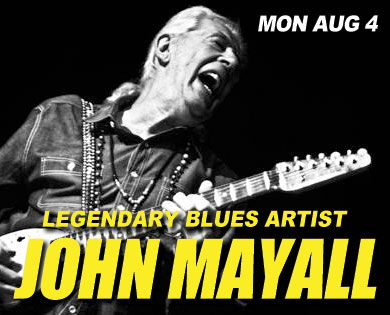 Don’t Miss Your Opportunity to See the Living Legend on Monday, Aug. 4

Legendary blues man, John Mayall, will join the incredible line-up of Sturgis concerts at the Buffalo Chip on Monday, Aug. 4 during the Sturgis Rally. After a career that has spanned over 50 years, Mayall will be headed to the Largest Music Festival in Motorcycling™ for a night of driving Chicago-style blues that you’ll never forget.

Mayall is an unbelievably talented musician, songwriter, and producer who knows his way around practically every instrument in the band: guitar, harmonica, keyboards, drums and vocals. In the early ‘60s he formed British blues group, The Bluesbreakers. Throughout the decade the group served as a finishing school to such blues greats as Eric Clapton, Peter Green, and Mick Taylor who went on to respectively form Cream, Fleetwood Mac and the Rolling Stones. The succession of blues greats who defined their roots under Mayall’s leadership also included including Jack Bruce, John McVie, Mick Fleetwood, and Larry Taylor.

After gaining widespread popularity in the US, Mayall moved from London to Los Angeles in 1969. For decades he continued to record and tour with the industry’s best blues musicians as the “Bluesbreakers,” but in 2008 Mayall announced he would permanently retire the “Bluesbreakers” name. The announcement caused quite the stir within the blues community, but luckily for fans, Mayall was not able to stay away for long. In 2009, Mayall was back in the studio in to record a new album with his newly formed four-piece and has been touring since.

Expect to be blown away when the godfather of British Blues takes to the Buffalo Chip’s Wolfman Jack Stage. Mayall’s infectious rhythms and unbelievable talent will leave you wondering how the blues can bring so much joy, and his awe-inspiring energy will leave you in utter disbelief that he recently turned 80!