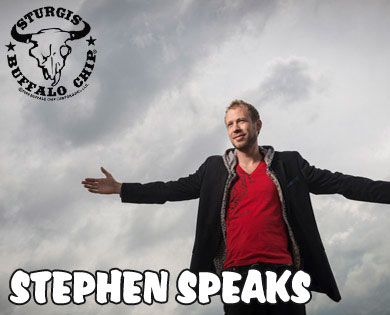 Create Your Own Slice of Paradise at the Chip’s Showcase Stages During Summer Music Festival!

Soulful acoustic guitar and a unique batch of melodies will provide you with and a change of pace from the frenzied rock blistering the Buffalo Chip stages this August. Stephen Speaks make its Sturgis Rally debut at the Chip® and the word is spreading like the hordes of bikers who will soon fan out across this nation’s highways on their way to the Best Party Anywhere™.

As the main producer, singer and songwriter, Ripperger is the only official member of the group and is solely responsible for its direction.

Ripperger has truly built a “cult following,” as fans of Stephen Speaks constantly flood the band’s Facebook page with anecdotal memories of past shows. Speaks’ fans also provide Rockwell with the most sincere form of musical flattery – cover versions of his material. A quick YouTube search produces solo acoustic fan versions of Rockwell-produced tunes like “Passenger Seat” and “Out of My League.”

After watching Stephen Speaks perform at the Chip, you’ll find yourself scouring YouTube for clips of the musically gifted Ripperger, who is ready to conquer the next level of his career with the release of his fifth album.

Don’t miss the opportunity to get in on a performance unlike one you’ve ever seen at the Chip’s summer music festival. Be sure to check out Stephen Speaks and the rest of the awesome lineup of Sturgis concerts! Reserve your passes now!

“Thanks to The Legendary Buffalo Chip!! You do know how to REV US UP!!” – Moe Disney-Griffitts“.