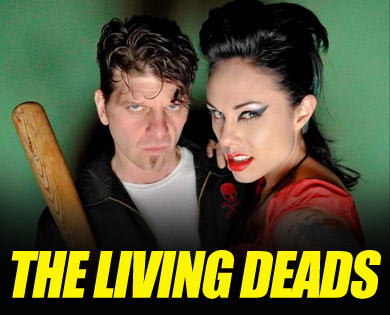 Sink Your Teeth into Some Sexy Psychobilly Leading Up to and During the Sturgis Rally!

It’s impossible not to have a good time when The Living Deads explode onto the stage at The Best Party Anywhere®. The band’s sexy swagger grabs your attention, and its greasy, energetic and sensual rockabilly punk sound keeps it! Sultry upright bass player Symphony Tidwell, dramatic drummer Randy McKnight and their undisclosed kidnapped guitarist will knock you out when the group joins the lineup of concerts at the Sturgis Buffalo Chip.

Let The Living Deads get your Sturgis Rally party started by joining them for the Bikini Beach Pre-Party, Aug. 1-4, then rock out on the showcase stages throughout the rest of the Chip’s August music festival.

When the Living Deads’ original guitarist unexpectedly quit the band one night at 3 a.m., Tidwell and McKnight hatched up a plan to kidnap local guitarists instead of permanently filling the vacancy. Since then the duo has kidnapped over 60 different guitarists including Danny B. Harvey of The Head Cat, Chuck Hughes of The Hillbilly Hellcats, James Hunnicutt of The Revolvers, Hank Hays and many more. 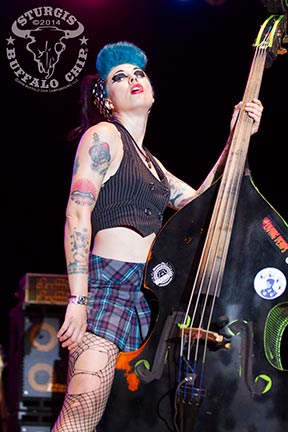 Who will The Living Deads drag onto the stage in a burlap sack to perform for you during the 2016 Sturgis Rally? There’s only one way to find out. Reserve your passes now for the Best Party Anywhere!

Have you seen The Living Deads perform or want to? Leave a comment about it below.