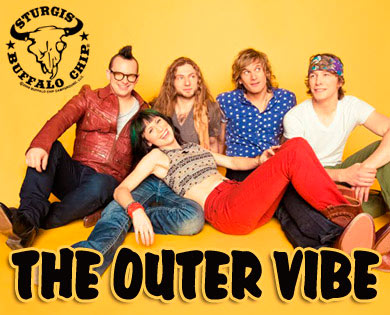 Feel the Vibe From These Sturgis Rally Newcomers!

Take just one listen to the motorcycle riding anthem, “Hoka Hey,” and you’ll be inspired to saddle up your bike and steer it toward the Sturgis Buffalo Chip, where you can check out The Outer Vibe’s first appearance during the 2014 Sturgis Rally.

The feel-good Michigan-based band is all about having fun, playing sweet tunes and, of course, riding bikes. “Hoka Hey,” The Outer Vibe’s hit single, features a motorcycle-themed music video and lyrics such as, “Cock the hammer back, and give that whip a crack on this chariot of chrome.”

The Outer Vibe bring a “Big America” energy larger than a 1960s Detroit assembly line to the Chip’s annual August music festival in Sturgis. The band combines the Motor City’s passion and power with the upbeat, good feelings of the West Coast and a cinematic southwestern nostalgia.

“Hoka Hey” is the title track from the group’s debut album. It was licensed by ABC News’ “Good Morning, America” and West Michigan’s Baker College in 2013. Now, The Outer Vibe have written a collection of new material that’s gained the attention of nationally known producers, and band members are anxious to play this new music live while preparing to record their highly anticipated follow-up to “Hoka Hey.”

The last time we checked, there was no better place to experience live music then at Largest Music Festival in Motorcycling™. So – “Hoka Hey” – and find yourself a spot in the crowd. “Chase those twists and turns till your story’s carved in stone” at the 2014 Sturgis Rally, and be sure to check out the rest of the Chip’s legendary lineup of Sturgis concerts. Reserve your passes for the Buffalo Chip’s August music festival now!

“Love this place! Last year was my first time and we had a blast! I have already bought my tickets for this year! This is my new home.” – Nick Edwards