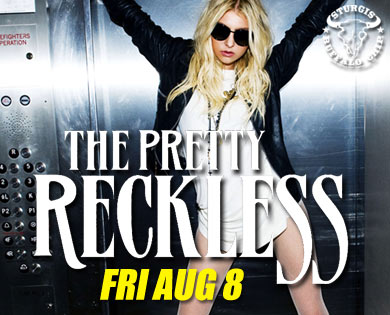 Get Wild and Unruly at this year’s Best Party Anywhere™

Prepare to be hit with more swagger than you can handle because in-your-face rockers, The Pretty Reckless, have joined the star-studded lineup of Sturgis concerts at the Buffalo Chip’s 2014 Motorcycle and Music Festival. These present-day rock gods take to the Wolfman Jack Stage on Friday, Aug. 8!

You may recognize The Pretty Reckless’ front woman, Taylor Momsen, as the quick-witted Jenny Humphrey from Gossip Girl. But since leaving the show, the actress-turned-musician has transformed into one of the most confrontational, sexy and talented female rockers the world has ever seen. It’s no surprise she and her bandmates have spent well-deserved time at the top of the Billboard charts.

The Pretty Reckless’ unique approach to hard rock and Momsen’s growly alto voice will hit you like sucker punch, no matter how prepared you think you might be. Although you’ve heard the band’s songs on rock radio, you’ll be blown away as live renditions of hits like “Make Me Wanna Die,” “Kill Me,” “Going to Hell” and “Heaven Knows” echo through the Buffalo Chip’s natural outdoor amphitheater.

Don’t miss out on your only chance to see a band that’s rewriting the rules of modern rock during the Chip’s August music festival. Reserve your passes now and see The Pretty Reckless unleash at the Best Party Anywhere™!

“I discovered the Chip in 2010 and have been back every year since. I could write thousands of words of praise so will only say ‘IT’S THE BEST PARTY ANYWHERE!’”
Dave Stevenson
Alberta, Canada