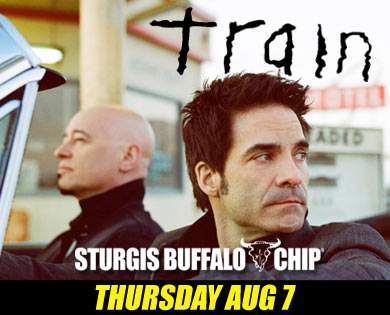 For the first time ever, fans will be merciless against the addictively alluring sounds of Train as they join the onslaught of big-name Sturgis concerts thrilling crowds at the Chip’s annual Motorcycle and Music Festival this August. The three-time GRAMMY award winners will crawl inside your brain and take over with a full-blown invasion of unforgettable hooks during their mesmerizing Sturgis Rally debut, Thursday, Aug. 7 on the legendary Wolfman Jack Stage.

Since releasing their first album in 1996, it’s been practically impossible to turn on a radio without hearing one of the songs from Train’s massive list of hits. The band’s performance at the Chip’s summer music festival will let you belt out the lyrics along with energetic live renditions of such songs as “Hey, Soul Sister,” “Drive By,” “Drops of Jupiter,” “Marry Me,” “50 Ways to Say Goodbye,” “Meet Virginia,” “Calling All Angels” and “Save Me, San Francisco.”

For nearly twenty years, the San Francisco-based band has enjoyed their time at the top, with multi-platinum selling albums, chart-topping hits and sold out shows. But after Aug. 7, Train will also be able to cross another major milestone off the list—performing in front of an endless sea of fans at the Largest Music Festival in Motorcycling™!

So what are you waiting for? Don’t miss out on your chance to see one of today’s biggest names in music at the Buffalo Chip during the 2014 Sturgis Rally. Reserve your passes now and see Train at the Best Party Anywhere™!

“The highlight of Sturgis! If you go to Sturgis and you don’t go to the Chip, you didn’t do Sturgis.” – Chad Herbst