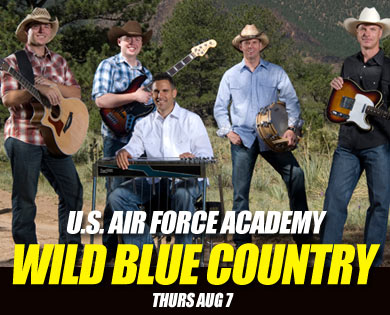 Few things are more American than the U.S. military and country music. During the Buffalo Chip Freedom Celebration you’ll experience both at the same time with two performances from Wild Blue Country! Take in twangy steel guitar, blistering solos and crystal-clear vocal harmonies as the U.S. Air Force Academy’s country band helps kick off the Freedom Celebration Ride by playing your favorite country hits on Main Street in Spearfish. Then help the band salute our soldiers by watching its poignant acapella performance of the national anthem later that evening on the Buffalo Chip Main Stage between performances by Pop Evil and Train.

It’s clear the five airmen in Wild Blue Country have equal dedication to their country as they do to creating first-rate country music. The band travels the nation, promoting the Air Force and honoring veterans, so their special stop at the Freedom Celebration will be a fitting addition to the Chip’s day-long military tribute!

Wild Blue Country has regularly been featured on the Grand Ole Opry and television shows like “Nashville Now” and “Opry Back Stage,” so don’t miss your chance to see, not one, but two separate live performances from them during the Sturgis Rally. Reserve your place at the Buffalo Chip’s Freedom Celebration and Freedom Celebration Ride today!

“The Legendary Buffalo Chip supports the troops and vets. I see it every year at the Rally. Why I keep coming back to the Chip!” – Michael Jole