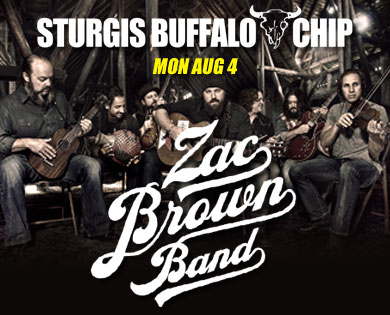 Zac Brown Band’s country roots may run deep, but the band’s irresistible fusion of rock, folk, soul, country, bluegrass and reggae will absolutely floor every member of the Buffalo Chip audience—not just the country fans. What you’ve heard of this band on the radio is a mere glimpse of the explosive energy and tremendous creativity you’ll experience when Zac Brown Band storms the Buffalo Chip stage with this mind-blowing mash up.

Their ability to break down genre barriers, combined with their expert musicianship, has made Zac Brown Band one of the most successful bands to ever grace the Buffalo Chip stage. Since their formation in 2002, three of the band’s five studio albums—“Uncaged,” “You Get What You Give,” and “The Foundation”—have gone platinum. In addition, they’ve amassed an enormous list of number one hits including “Chicken Fried,” “Highway 20 Ride,” “Free,” “Toes,” “As She’s Walking Away,” “Colder Weather,” “Knee Deep,” “Keep Me in Mind,” “Goodbye in Her Eyes,” and “Sweet Annie.” Their recent collaboration with Nirvana’s Dave Grohl, “The Grohl Sessions Vol. 1,” has also received critical acclaim.

While you can expect to hear the Zac Brown Band hits you know and love during their Buffalo Chip performance, don’t be surprised when they come at you with an unexpected cover from a band like Pearl Jam, Rage Against the Machine, Metallica, Led Zeppelin or even Pink Floyd.

No matter your musical leaning, you’ll be positively blown away when Zac Brown Band takes to the Buffalo Chip stage on Aug. 4. Get in on this unbelievable night of Sturgis concerts and reserve your passes today!

“The Chip is like a drug…one time and you’re hooked for life!”
– Joe Miller