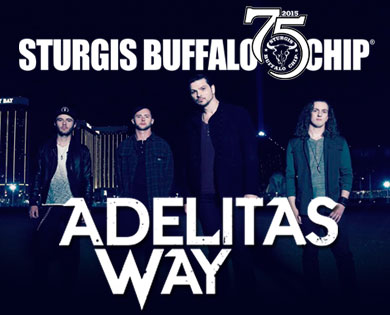 Brace yourself for a powerful punch that will hurt so good on the final night of the Sturgis Rally. Buffalo Chip fan favorites Adelitas Way are joining the lineup of Sturgis concerts on Saturday, Aug. 8 between performances by Nicnos and WAR, and the blow of their bold and brash sound is sure to leave you breathless.

Adelitas Way broke into the mainstream in 2009 with the song “Invincible” and has since seen a long series of tracks top the active rock charts including “Dog on a Leash,” “Criticize,” “Sick,” “Alive,” “The Collapse” and many others. The edgy Las Vegas-based hard rockers are experts in using their music to draw out pained and primal emotions, and in doing so they’ll make you feel as if the songs you’re hearing were written specifically for you.

If you’ve seen Adelitas Way before, you ain’t seen nothin’ yet, because the band has deepened their sound and intensified their brand of hard-edged rock to bring you more brutally raw energy than ever before. Will you be able to handle the band’s rougher and more rugged sound or will you have to head home from the Sturgis Rally with your tail tucked between your legs instead? Show the world you can take a hit from Adelitas Way and reserve your passes now!

Are you one of the troopers rugged enough to stick out the festival to the very last day? Tell us about it in the comments below!

“This will be one bad ass party.” – Karen Amy Whitt Finley

“The ONLY place to party during the rally! Love the Legendary Buffalo Chip!”
– Joyie Rounsaville-Lass