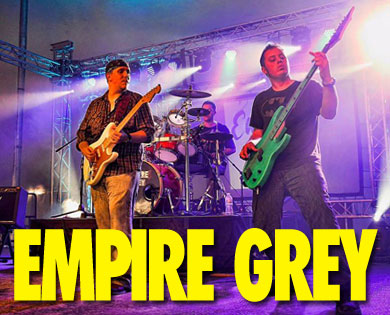 Get ready to take flight through space and time with the progressive psychedelia of Empire Grey’s Sturgis concerts. Fans of Pink Floyd, Jimi Hendrix, Ted Nugent and other virtuosic guitar-driven progressive rock bands of yesteryear will experience a flashback to a funkier time when this Oklahoma-based power trio rocks the Chip’s showcase stages during the Sturgis Rally.

The members of Empire Grey began writing and performing music together when they were only 17 years old. The band, known then as Grasyde (pronounced “Gray-side”). performed together for three years, packing local venues and establishing a loyal following in their native Oklahoma. While things looked bright for the young band, the members felt new directions were paramount to their musical development. Following a five-year hiatus, the band decided to reunite in 2014  under a new name, Empire Grey. The name signified the strength needed to overcome difficulties and remain positive when life throws you an unexpected curveball.

Empire Grey has picked up right where Grasyde left off, growing their following regionally and performing at some of the region’s best venues while they work on recording their debut album. Now the reinvigorated band is ready to take you to the next frontier with their intense psychedelic rock jams during the Sturgis Rally. All you’ve got to do is strap yourself in and prepare for takeoff. Don’t miss these face-melting Sturgis concerts–reserve your passes now!

”The whole Sturgis experience all in the campground!”
– Billy Channel