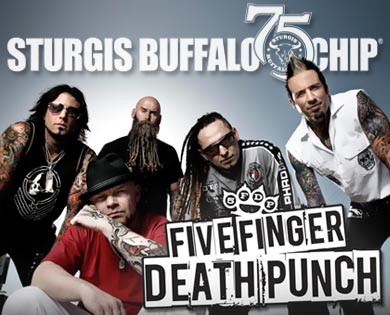 Five Finger Death Punch’s unrelenting blend of crushing metallic grooves and defiant, searing melodies will knock you down during their Sturgis Rally debut at the Buffalo Chip’s 2015 August music festival. The Las Vegas heavy metal outfit will be making their presence known on the legendary Wolfman Jack Stage Saturday, Aug. 1, 2015.

Five Finger Death Punch is sure to deliver one of this year’s heaviest Sturgis concerts. So are you going to put on your skirt and stay home? We didn’t think so. If you can take the punch, reserve your passes today!

Has 5FDP shown you the “Way of the Fist?” Tell us about it in the comments below!

“The Chip is like a drug…one time and you’re hooked for life. Thanks guys for always putting on the best party of the year.”
– Joe Miller