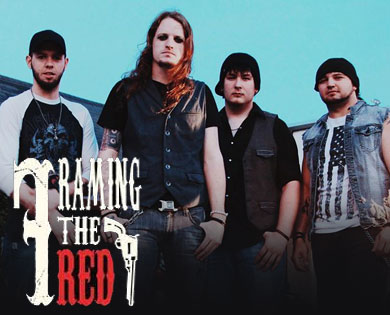 When Framing The Red takes to the Buffalo Chip showcase stages with its spellbinding southern hard rock riffs and alluring lyrics, the experience will be one you’ll talk about long past Sturgis 2015. The band’s contagious energy and high impact stage show will make sure there’s not a single inch of the stage or the dance floor that goes unused!

Framing The Red has only been together and touring for five years, but they’ve taken the national music scene by storm with a talent level that would make you think they’d been touring for ages. These Mississippi and Louisiana natives aren’t trying to get their foot in the door of opportunity; they’re knocking it down!

After Framing the Red’s first single “A.O.” gained mass popularity across the south, the band took their success and ran with it. They got right to work on their debut album, an effort that also brought the world the instant favorites “Lay Down Beside Me” and “Country Band Man.”

The meteoric rise Framing The Red has experienced has brought them the kinds of opportunities most up and comers can only dream of. Having shared the stage with Mötley Crüe, Sevendust, Alien Ant Farm and Pop Evil, this is a band truly on the brink of national stardom. Don’t miss your chance to see to say you got to see Framing The Red just before they made it big. Reserve your passes now!

“Best place to be during the rally. Great bands and music, great staff, great experiences. Once again, this will not be my last year staying at the Buffalo Chip!” – Nathan Voshell