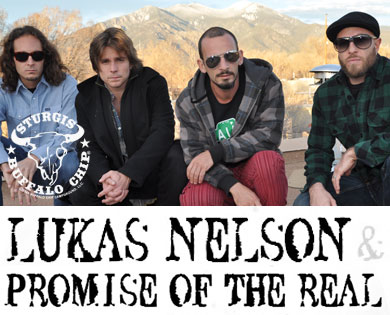 Let down your hair, kick up some dirt and let the distinctive sounds of Lukas Nelson & Promise of the Real help you find yourself on Tuesday, Aug. 4. The band will be kicking off an unforgettable night of Sturgis concerts on the Wolfman Jack Stage with their self-described brand of “cowboy hippie surf rock” prior to performances from Shinedown and Lynyrd Skynyrd.

POTR is lead by the son of country legend Willie Nelson, and when you close your eyes and listen, it’s almost as if you’re hearing the voice of the almighty braided one himself. But Lukas Nelson’s uncanny resemblance to his father’s distinctive tone is where the similarities stop. The band’s rock roots run deep, channeling sounds more similar to Jimi Hendrix and Neil Young. With a strong blues base, POTR throws in a little reggae and country to create colorful textures and a musical mash-up that’s uniquely their own.

Lukas Nelson & POTR’s unbelievable talent has been recognized by such legendary performers as John Fogerty, B.B. King and Willie Nelson, with whom the band has toured, as well as Neil Young, who recently featured them on his politically charged collaborative album, “The Monsanto Years.” These collaborations, in combination with appearances on The Tonight Show, Jimmy Kimmel Live!, and The Late Show with David Letterman, have helped the band win the hearts of millions.

One listen to POTR, and you’ll see how perfectly the band balances their ability to stay true to their roots while carving out their own path. Make sure you do the same and reserve your passes now so you can catch their life-changing performance during the Best Party Anywhere™!

Why do you think it’s important to carve out your own path the way Lukas Nelson has? Let us know in the comments below!