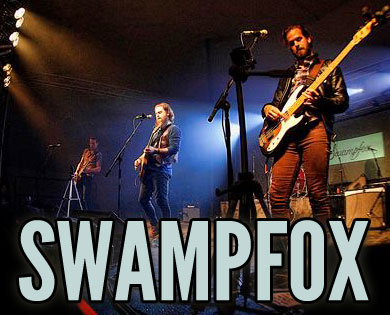 If you’ve ever been to the Buffalo Chip, you know you’re bound to hear several excellent bands playing many different styles of music on any given day. However, one thing you’ll almost never hear is one band incorporating elements of two completely separate genres into a single moment of a song the way Swamp Fox does with banjos and heavy metal. Plant your feet in preparation of the blast that will come from the showcase stages during their Sturgis concerts because their sound may go down like wine, but it kicks like ‘shine.

Swamp Fox’s sound can’t truly be encapsulated by a single genre. Their songs span the spectrum of moody and introspective grunge-flavored alt-rock to intense in-your-face metallic hardcore punk destined to turn any dance-floor into a circle pit. Frontman Dakota Fletcher’s vocals cover this continuum effortlessly, thanks to the support of the airtight rhythm section and guitar pyrotechnics that create the foundation for their musical tapestry. The band’s self-titled new album will be released just in time for the Sturgis Rally, which means you can get an earful before the rest of the nation tastes the potent brew this Tennessee quartet has been cooking up for the past few years.

Swamp Fox’s fangs are bared and ready to deliver the bite the modern rock world has been waiting for. Be among the first in the Midwest to hear and witness the extreme talent of these up-and-coming rockers. Show these southern boys a little Sturgis Rally hospitality and reserve your passes now!

”Well, I have to say it was a blast, but ended way to soooooooooon!”
– Mike McKnight