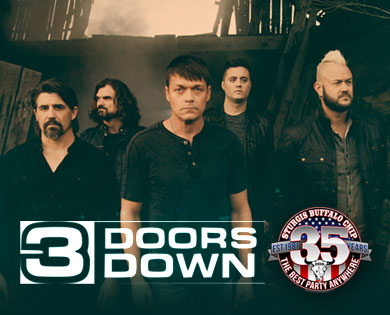 Prepare yourself for a boundary-smashing, unforgettable performance that only a true expert rock band can stage. You can try to bar the door, but there will be no stopping them when 3 Doors Down return after a more than a decade to rock the Sturgis Buffalo Chip® ‘s August music festival into oblivion. The Mississippi-based alternative hard rock quintet kicks out the jams from the Wolfman Jack Stage on Saturday, Aug. 6.

3 Doors Down has been delivering one of rock’s most dynamic live shows for two decades. Their extensive catalog of hits displays their diversity as a band. On harder numbers like “When I’m Gone” or the 2000 mega smash “Kryptonite,” the band puts you face first on the end of a rock and roll battering ram crashing through the obstacles of day-to-day life. Before you’ve recovered, they’ve already drifted into melodic and introspective ballads like “Here Without You,” “Be Like That,” and “Away from the Sun” that’ll raise the lighter from your pocket and into the sky. And when you think you’ve heard it all, they break into a song like their latest single “In the Dark,” featuring a complex vibe that’s as much at home in a mosh pit as it is on a night club dance floor. By the time it’s over, the only thing you’ll be able to say is, “Damn! That was one hell of a ride!”

In the 20 years since their formation, 3 Doors Down has sold 20 million albums worldwide, but they’re only just getting started. Their first album alone, 2000’s six-time platinum “The Better Life,” earned them the kind of success most bands only dream of, but they continue to create genre-defining work and perform with the same hunger and resolve they had when they began. One listen of their 2003 live EP, “Another 700 Miles,” proves 3 Doors Down is a band whose live performance prowess is on par with their undeniable ability to pen songs ready to rule the radio.

3 Doors Down has been blowing the doors off venues all over the world for nearly 20 years, and when they bring their spectacle to the Sturgis Buffalo Chip’s all-natural outdoor amphitheater, you won’t have anywhere to hide. Don’t miss your opportunity to witness what’s sure to be one of the most outstanding performances of the Chip’s historic 35th anniversary party. Reserve your passes now!

“I LOVE the Buffalo Chip because there are NO STRANGERS, we are all FRIENDS. You can relax at your campsite, drink a few cold ones with the band, or just rock out sitting on your bike in the crowd. It’s the place that you can be YOURSELF or you can be someone else! It’s the place that you ALWAYS COME BACK to year after year AND HAVE AN EVEN BETTER TIME the next go around. I LOVE LOVE LOVE THE CHIP! It becomes my home for 9 days out of the year and it has yet to disappoint!” – Renee Green