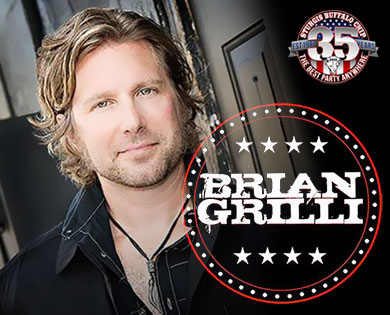 Let your inner outlaw out when Brian Grilli tears up the 35th anniversary of the Sturgis Buffalo Chip®. After bringing you two epic performances on the main stage in 2015, this Virginia country rocker will be adding a third day to this year’s residency and making the rounds of the Chip showcase stages!

Brian Grilli has been steadily climbing his way up the ladder in the Nashville scene. He was recently nominated for “Musician of the Year” by the Nashville Universe and sold over 16,000 downloads of his song “Damn Good Day.”

Brian Grilli’s outlaw anthems will set the tone for three evenings of August music festival madness that will leave your head spinning. Don’t miss your opportunity to take part in the Party of the Century. Reserve your passes now!

“It’s our home away from home! We love it there!”
– Susan Stahl