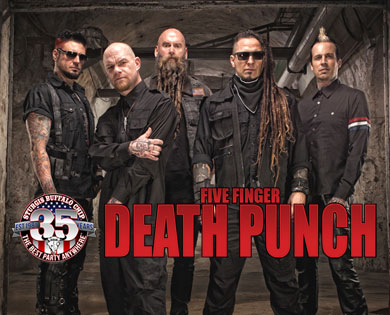 Since their debut album released in 2007, Five Finger Death Punch has catapulted to heavy metal superstardom. Some bands face instability when placed on similar light-speed trajectory, but 5FDP threw a saddle on that rock rocket and rode it to the seventh moon of metal mania. The band has been supporting their latest US Rock chart-topping release, “Got Your Six,” with a bevy of headlining slots at many of North America’s biggest rock festivals. Now 5FDP looks to raise the bar even higher with a steamroller of a performance befitting the Chip’s highly anticipated 35th anniversary party.

Five Finger Death Punch have mastered the groove metal genre, and the proof is in the pudding of their ever-expanding catalog of hits. Their singles “Jekyll and Hyde,” “Wash It All Away,” and “My Nemesis” have been terrorizing rock radio since “Got Your Six” released in September 2015. Time-tested 5FDP numbers like “Under and Over It,” “Remember Everything” and “Wrong Side of Heaven” continue to propel the band through massive arenas all over the world. Add in their powerful renditions of classic songs like “Bad Company” and “House of the Rising Sun,” and you’ve got a dangerously dynamic, ass-kicking spectacle that will have young and old alike raising their metal horns to the sky while head banging in glorious unison.Songs like “On the Road Again,” “Always on My Mind,” “Bloody Mary Morning,” “Hello Walls,” “Crazy,” “Willingly,” “Blues Eyes Cryin’ in the Rain,” “Mommas Don’t Let Your Babies Grow Up to be Cowboys,” “Good Hearted Woman” and “If You’ve Got the Money, I’ve Got the Time” helped Willie earn a staggering 11 Grammy Awards, seven American Music Awards, nine CMA Awards, five Academy of Country Music Awards and many others.

Five Finger Death Punch has made an art form of bludgeoning audiences around the world with their deadly precise and powerfully emotive performances, and when they roll their heavy metal blitzkrieg into the Buffalo Chip’s August music festival, you’ll be sure to get the punch you’ve all been asking for. Don’t miss your chance to see the kind of show that’ll leave a shiner on anyone who dares to stand in its way. Reserve your passes today!

Have you ever felt the force of Five Finger Death Punch? Tell us about it in the comments below!

“Five Finger Death Punch is life. The music is what keeps me going. That is all.”
– Casey Smith