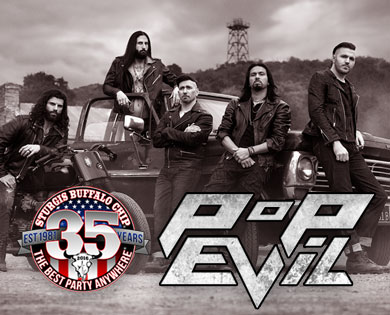 Brace yourselves– Pop Evil will be hitting audiences over the head with a rock and roll performance heavier than all the steel in a Detroit assembly plant. You can duck and cover, but when the Michigan quintet takes the Wolfman Jack Stage Friday, Aug. 12 prior to Buckcherry, they’ll leave nothing but a crater in their wake.

Pop Evil has established themselves as a rock force to be reckoned with since they released their debut EP in 2007. In that time, the band has become a mainstay on rock radio and the main stages of some of the biggest rock festivals in the world, touring with hard rock titans such as Five Finger Death Punch, 3 Doors Down and many more. The band is currently touring the U.S. and Canada in support of their fifth album, UP.

Pop Evil is one of those bands that constantly gets better, even when you think that’s no longer possible. The band’s dynamic rock show is chock full of their ever-growing catalog of hits, including “Torn to Pieces,”  “Footsteps,” “Trenches,” “Deal with the Devil,” and “Boss’s Daughter,” to name a few. By the time they’re done, you’ll be drenched in sweat with a smile permanently pasted across your face.

Don’t miss your opportunity to partake in a soul-shaking, head-banging, ass-kicking party with an amazing rock band you must see to truly understand the magnitude of their music. Reserve your passes today!