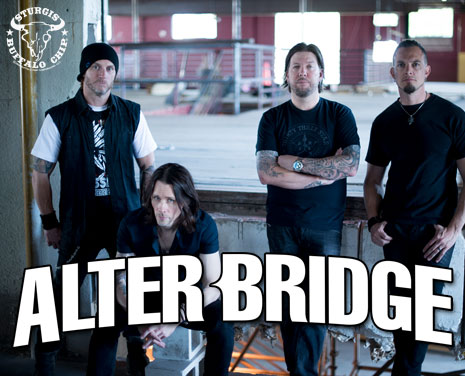 Come to Life with Alter Bridge at The Best Party Anywhere®

Raise your horns to the sky when Alter Bridge crosses into heavy metal hysteria during one of the Sturgis Buffalo Chip®’s heaviest concerts of the year. The badass Orlando-based alt-metal band will take the Wolfman Jack Stage by storm following the AMA Supermoto race Friday, Aug. 11, 2017.

A 90-minute head-banging tour de force awaits all in attendance as the band rips through their repertoire of monster tunes with laser-like precision. Songs like “Addicted to Pain,” “Blackbird,” “Isolation,” “Show Me a Leader” and many more have landed the band heavy rotation on modern hard rock radio and headlining slots on many of the biggest rock festivals in the world. Propelled by the breathtaking vocal power of front man Myles Kennedy and the blistering guitar work of Mark Tremonti, the band is currently touring in support of their latest release “The Last Hero” and will be fresh off a European tour when they hit the Chip’s August music festival like a ton of bricks.

The Best Party Anywhere® is in danger of exceeding its maximum weight limit because Alter Bridge’s jams are so heavy they test the laws of gravity. Unless you’re scared of soiling your pink laced undergarments or having yourself a hard rockin’ good time, you had better be there. Reserve your passes today!

Are you an Alter Bridge fan? Tell us why in the comments below!

“They bring in the best entertainment Sturgis has to offer! If you go there, be prepared for the best time of your life!”
– Michael Matula