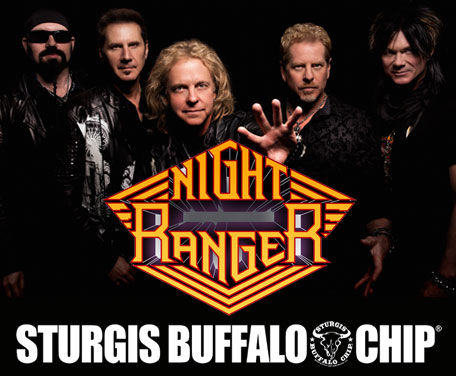 Indulge your wild side in a giant rock and roll party with enough hair and anthemic riffs to fill an airplane hangar when 80’s hard rock masters Night Ranger bring their gigantic sound to the Sturgis Buffalo Chip®’s August music festival. The San Francisco quintet will take over the Wolfman Jack Stage Saturday Aug. 5 following the insane Dirt Riot endurance races and prior to a performance from RATT to create a night of loud, fast and wild musical mayhem.

Night Ranger rose to acclaim in 1982 with their platinum debut release, “Dawn Patrol,” and have gone on to sell 17 million albums worldwide. The band has over 3,000 live performances under its belt and is celebrating its 35th anniversary in 2017 with a world tour, new studio album titled “Don’t Let Up,” and a live greatest hits album– “35 Years and a Night in Chicago.”

The band’s arsenal of arena-sized hits such as “Sister Christian,” “Don’t Tell Me You Love Me,” “When You Close Your Eyes,” “(You Can Still) Rock in America,” and several others have been staples of rock radio, TV and film soundtracks, video games, and wild parties for 35 years.

When August 5 comes, will you be in the center of The Best Party Anywhere, banging your head into oblivion? Or will you be sitting around the piano with your mom, working on your cover version of “Sister Christian” for the upcoming family reunion? Don’t miss one of the wildest nights of the Chip’s 2017 August music festival. Reserve your passes now!