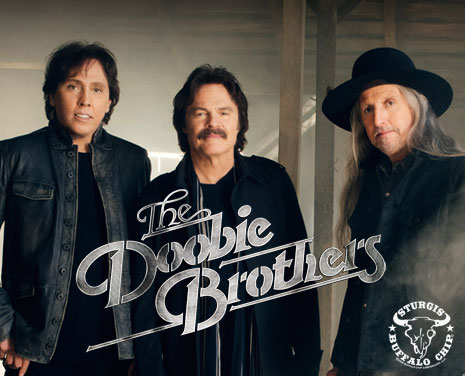 You’ve just had the perfect day. As you make your way toward the Wolfman Jack Stage in the Sturgis Buffalo Chip®´s natural outdoor amphitheater, a sudden, yet familiar wave of euphoria rushes through your body as the opening chords to a classic song by one of America’s most quintessential biker bands rings through the air. The song is “Rockin’ Down the Highway” by the Doobie Brothers, and in that moment you realize that Mon. Aug. 7, 2017 could not have gotten any better.

The Doobie Brothers are a classic rock institution, no matter which era of the group you draw from. Whether it’s the mellow boogie rock driven by Tom Johnston’s R&B-influenced guitar work, or the smooth electric piano-driven, blue-eyed soul of the Michael McDonald years, there’s no denying the band’s talent, versatility or their sprawling catalog of titanic tunes.

Since their formation in 1970, the Doobies have sold 40 million albums worldwide and crafted some of classic rock radio’s most celebrated tracks, including “Long Train Runnin’,” “Listen to the Music,” “What a Fool Believes,” “Black Water,” “China Grove” and many more. And they still deliver them with the precision that earned them admission into the Vocal Group Hall of Fame in 2004.

Since reuniting in 1987, The Doobies have been insatiable road dogs and equally prolific in the studio. They’ve collaborated and re-invented some of their most influential tunes with artists like Zac Brown Band and Brad Paisley and played a headlining set at the 2015 Lockn’ Music Festival alongside the String Cheese Incident.

When these monster musicians let loose upon The Best Party Anywhere®, the combined energy of over 40 years of performing experience and an unrivaled atmosphere will create an unforgettable experience you won’t be able to stop talking about. Don’t miss your chance to see one of the world’s most beloved biker bands in person,  reserve your passes today!