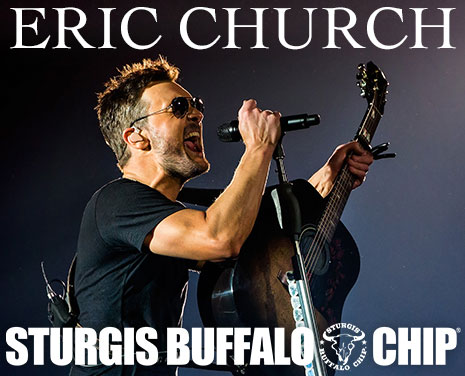 Put a Drink In Your Hand and Party at the Chip’s August Music Festival!

Indulge in sweet country-rock party anthems, the roar of American V-Twins, and all your best friends cheering together during a performance from Eric Church. The Nashville-based country-rock singer-songwriter extraordinaire will belt his hits from the Wolfman Jack Stage on Wednesday, Aug. 8, 2018, and all you need to do is be there with a drink in your hand.

Eric Church has been at the top of the country-rock world for over a decade now. Since the release of his debut album in 2006, the Chief has sold over 5 million albums in the US alone. Two of his albums hit no. 1, and all five have been in the top 10. Church is traveling cross continent as part of his “Holdin’ My Own Tour, which Pollstar named the no.1 most attended music tour in the world at the time of the tour, and selling out venues everywhere he goes. When the Chief has finished his performance at the Best Party Anywhere this August, you’ll have no doubt in your mind why he’s been breaking venue attendance records on the regular.

The ACM 2017 Merle Haggard Spirit Award winner will get the party into full swing with his catalog of crazy catchy hit tunes that includes “Springsteen,” “Talladega,” “Drink in My Hand,” “Record Year,” “Like a Wrecking Ball,” to name a few.

When August 8 comes, will you be hanging with Eric Church and all your friends with a drink in your hand, or will you be online shopping for a fedora, mustache wax and skinny jeans in preparation for your next solo Indie Rock listening party? Do the actual hip thing and reserve your passes now!

“Best party anywhere. The staff is friendly and helpful. Awesome music acts and shows; almost no reason to leave the Chip. Can’t wait for next year!” –Dave Ritchie