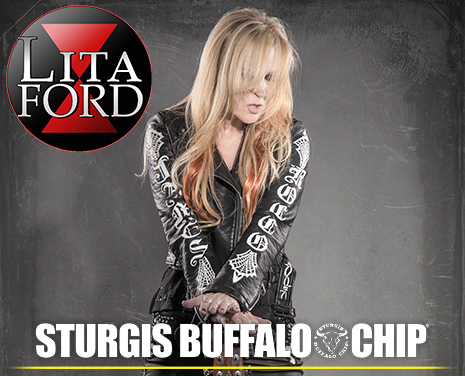 Get Lit AF with Lita Ford and Kid Rock on Thursday, Aug. 9

Immerse yourself in glam metal as Lita Ford takes you back in time to an era filled with lightning-fast licks and enough hair spray to make Bigfoot look pretty. This guitar goddess will remind you just how much you love the ‘80s when she lights up the Buffalo Chip’s motorcycle and music festival with searing solos and brilliant, emotional ballads prior to Kid Rock on Thursday, Aug. 9.

Lita Ford began her career as lead guitarist in the all-girl hard rock band the Runaways, partnering with eventual Rock and Roll Hall of Famer Joan Jett. After going solo in the ‘80s, Ford’s eight studio albums produced numerous hits including “Kiss Me Deadly,” “Gotta Let Go,” “Falling Out of Love,” and “Close My Eyes Forever,” a duet with metal legend Ozzy Osbourne considered one of the greatest ballads of the 1980s.

When Lita Ford takes to the Wolfman Jack Stage, you’ll have your face melted by hypnotic guitar playing one moment and feel the raw emotion of her heartfelt ballads the next. She’ll bring the hair spray and scorching solos to the music festival – you just bring a beer.

Don’t miss your chance to see this living rock legend in action! Reserve your passes today for The Best Party Anywhere®.