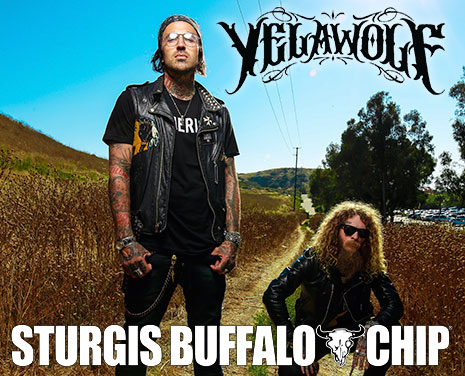 Get ready for a party that spans generations and genres of biker music like few have ever done before when new school and old school meet on the Sturgis Buffalo Chip’s stage. Heavy-hitting motorcycle musician Yelawolf will get the party revved up prior to a performance from the original biker band and music legends John Kay & Steppenwolf on Friday, Aug. 10. When Yelawolf’s blend of hip-hop, rock, country, blues and biker badassery hits your ears, you might not be sure how to describe it, but one thing you’ll know for sure is you won’t be able to stop listening until the show is over.

The Alabama-based act’s multiple-genre mastery is evident not only through the songs themselves, but also the list of artists with whom he has collaborated. The inspiration to mix country, blues, rock and hip-hop into single songs came from Detroit’s own Kid Rock, whom Yelawolf has collaborated with on “Let’s Roll” and “Get Mine.” Joint ventures with artists like blink-182’s Travis Barker, Ed Sheeran, Wynona Judd and Eminem further show Yelawolf’s versatility and comfort with styles like punk, pop and country in addition to hip-hop.

You’ll be moved to belt out catchy choruses. Hits like “Till It’s Gone,” “Best Friend,” and “American You” seamlessly weave together influences of blues, country and classic rock into blistering hip-hop verses and melodic hooks, and high energy bangers like “Let’s Roll,” “Outer Space” and “Daddy’s Lambo” will have the whole party losing its mind.

When August 10 rolls around, will you be running wild and free, howling at the moon with Yelawolf, John Kay & Steppenwolf and thousands of your soon-to-be best friends at The Best Party Anywhere, or will you be stuck at home dragging your butt on the carpet? Don’t even think about missing this show– Reserve your passes now!