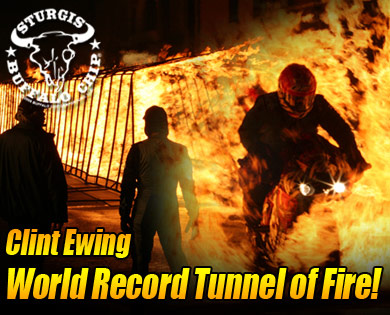 During his 2008 Tunnel of Fire stunt, Clint immediately abandoned his smoking bike to have wet blankets and water sprayed over him to cool him and the bike down.

The Wednesday Aug 7 Tunnel of Fire World Record attempt will be televised for national television at the CrossRoads at the Buffalo Chip. Be there, in person, and feel the heat of his death-defying attempt! You might end up on TV as you watch Clint Ewing risk his life!

In addition to his crazy World Record Tunnel of Fire attempt, Clint will perform stunt shows Monday, Tuesday and Thursday in the amphitheater, doing wheelies, drifts, stoppies and stalls during the Sturgis motorcycle rally. Catch his stunt show twice a day, along with his female rider friend who will hand out freebies to spectators!

In addition to the Tunnel of Fire stunt, Clint has completed more than 105 motorcycle stunt show events to date and has been featured on NBC, Discovery and SpeedTV. He performs all across the nation for events such as AMA Superbike, National Hot Rod Association and the Vans Warp Tour, as well as the one and only Sturgis Buffalo Chip!

Get ready for an electrifying, high impact motorcycle stunt show as Clint Ewing races the clock through a Tunnel of Fire. Don’t miss it!