Buffalo Chip, SD (November 3, 2015) – The Sturgis Buffalo Chip® has teamed up with chart-topping heavy metal rockers Five Finger Death Punch, Epiphone, Revolver Magazine, Motorcycle USA, Hot Leathers and Salt Lake City’s Rock 106.7 to give one music fan a very special holiday gift. The winner of the 2015 Rock the Holidays Sweepstakes will receive an Epiphone Les Paul Custom PRO signed by the members of Five Finger Death Punch and a $250 shopping spree from Hot Leathers. Entering the sweepstakes is free and can be easily accomplished by visiting BuffaloChip.com. 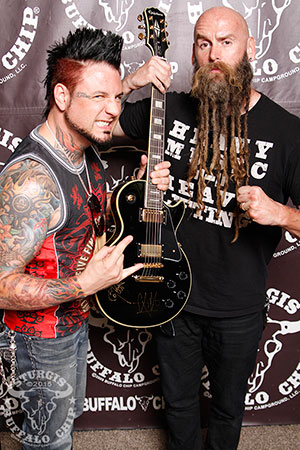 In addition to the band’s autographs, the Epiphone Les Paul Custom PRO, known as the “tuxedo Les Paul”, is dressed to kill. The Epiphone Les Paul Custom features ProBucker™ humbucker pickups with coil-splitting, classic gold hardware, and pearloid inlays, and the fully bound body, neck and headstock make it one of the most recognized guitars in the world. Les Paul himself used this model in concert on his weekly television show and on his album covers.

“This is a really cool collector’s guitar,” says Rod Woodruff, president of the Sturgis Buffalo Chip. “It will be the center of attention hanging on one lucky winner’s wall. You can’t buy a guitar like this; it’s definitely a very unique piece, and we’re excited to give it away to one of our fans.”

Members of Five Finger Death Punch signed the “Rock the Holidays” guitar following the band’s Aug. 1 performance at the Buffalo Chip’s 2015 Motorcycle and Music Festival during the 75th anniversary Sturgis Rally. The band thrilled tens of thousands of fans in the audience performing hits such as “Wrong Side of Heaven” and “Jekyll and Hyde.”

Fans may enter the Rock the Holidays Sweepstakes at Buffalochip.com/RockTheHolidays or participating partners’ sites for their chance to win this exclusive Buffalo Chip collectible. Registration closes Thursday, Dec. 10, 2015 at 5 p.m. MST. The winner will be announced Dec. 11.