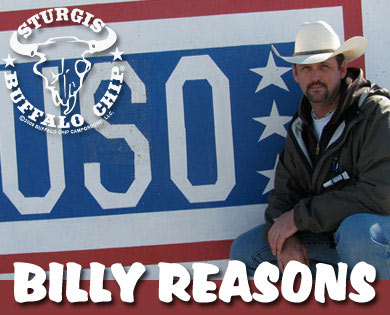 Nashville Rocker, Billy Reasons, Provides the Right Reasons for You to Ride into the Sturgis Rally

Are you ready to hop aboard your hog, crank up some Hank Williams Jr. and hit the highway for the Sturgis Rally?

Billy Reasons is tailor-made for the Chip’s August music festival, because, like so many Rally-goers who adore the old-school country legend, Reasons loves to “Crank the Hank.” He even wrote a song about it!

“Crank the Hank” is just one of the scores of hits penned by countrified rocker, Reasons, who will bring all of his rowdy friends to the Sturgis Buffalo Chip® showcase stages during our August music festival.

Influenced by legendary country pickers, Williams, Merle Haggard and George Strait, as well as contemporaries, Kenny Chesney and Dierks Bentley, the Nashville singer/guitarist possesses a true country flair and hard-hitting sound that will be music to your ears!

Chosen from the Buffalo Chip’s Big Sturgis Gig™ online talent search, Reasons is a true testament to hard work and dedication. He was electrocuted and nearly died after direct contact with live voltage, and the damage to his body and his mind would have been enough to dissuade anyone from ever picking up a guitar again.

Reasons, who owns 19 guitars, overcame his physical ailments. Now he’s stronger than ever and ready to show you why he belongs in our legendary lineup of Sturgis concerts!

Have you witnessed Billy Reasons’ guitar mastery? Share your stories below!

“This will be one bad ass party!”- Karen Amy Whitt Finley