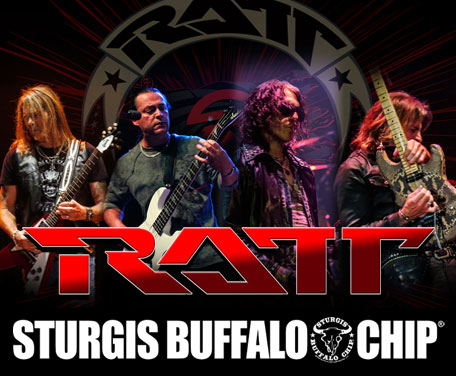 Get ready for a no-holds-barred rock and roll party that’ll spin your head ‘round and ‘round when RATT brings their melodic hair metal to the masses. The recently reunited band featuring three members from the band’s classic lineup will infest the Wolfman Jack Stage Saturday Aug. 5 after some dirt-shredding Dirt Riot racing action and a performance from Night Ranger to create an unforgettable night of decadent head-banging nostalgia.

RATT rose to prominence during the legendary Sunset Strip scene of the 1980s.

Their 1984 debut album “Out of the Cellar” sold over 3 million copies, and the band has gone on to sell over 15 million albums in the U.S. alone. Despite all their success, they perform around the country with the same hunger and intensity that propelled them to superstardom in their early days.

The band’s bevy of head-banging hits, such as the 1984 smash “Round and Round,” “You’re in Love,” “Lay It Down,” “Wanted Man,” and “Back For More,” have been packing arenas and amphitheaters with rabid RATT fans for over three decades.!

When August 5 comes, will you be raging a once-in-a-lifetime party? Or will you be drinking virgin daquiris, sitting on YouTube watching RATT concerts wishing you could be at one? Don’t miss one of the most epic nights of the Chip’s 2017 August music festival. Reserve your passes now!