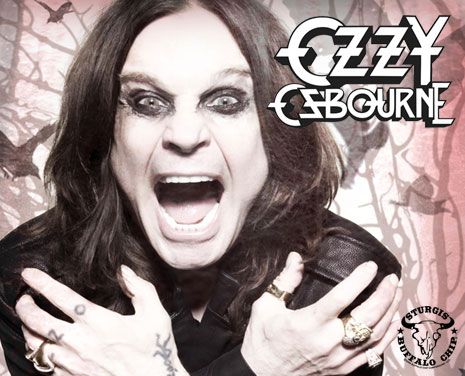 Get ready to experience a Blizzard of Ozz when the most legendary vocalist in heavy metal history takes the Sturgis Buffalo Chip®’s August music festival by storm on Wednesday, Aug. 9. The Godfather of Heavy Metal will rain down from the Wolfman Jack Stage with the revolutionary riffage that’s inspired every metal band since following the RSD Super Hooligan Races presented by Indian Motorcycle and Pop Evil performance, taking an already crazy day completely off the rails.

The breadth of Ozzy’s catalog is truly staggering, having released nine genre-defining albums with Black Sabbath and 11 solo records throughout the last five decades. He is known to mix tunes from his solo releases with timeless Black Sabbath material during his live shows. Sabbath classics like “Iron Man,” “Paranoid,” and “War Pigs,” have crept their way into his set lists alongside Ozzy’s monster solo hits like “Crazy Train,” “Mama, I’m Coming Home,” “Bark at the Moon,” and so many others. It’s this diversity, longevity and unmatched songwriting skill that’s earned Ozzy GRAMMY awards, a Rock and Roll Hall of Fame induction and the 2004 NME Award for Godlike Genius, among numerous other accolades and the nickname “the Godfather of Heavy Metal.”

The Largest Music Festival in Motorcycling® is about to go off the rails on a crazy train, because when the Ozzman cometh you’re going to bark at the moon until you lose your voice and your mind. So what are you going to do? Call your mama and tell her you’re coming home, or reserve your passes today?

What would you like to hear live from the Godfather of Heavy Metal? Tell us about it in the comments below!

“Lets face it, the Buffalo Chip is always going to be the Best Party Anywhere!”
– Del Brett