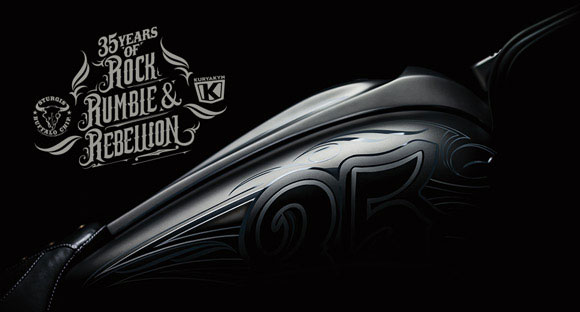 SOMERSET, WIS, FEB 25, 2016—The Sturgis Buffalo Chip®, “The Largest Music Festival in MotorcyclingTM,” has teamed up with Kuryakyn® and Epiphone® to salute 35 years of “Rock, Rumble & Rebellion” at the annual August rally in the Black Hills.

To commemorate the iconic venue’s 35th anniversary in 2016, the Sturgis Buffalo Chip enlisted Kuryakyn to design and build a custom performance bagger that pays tribute to the annual convergence of motorcycle and rock ’n’ roll cultures. The Rock, Rumble & Rebellion Tour kicks off at Daytona Bike Week with a public unveiling of the custom 2015 Harley-Davidson® Road Glide® and matching Epiphone Sheraton II guitar. Rally goers have two chances to get an up-close and personal look at this amazing bike and guitar. The first unveil will be at Saints & Sinners Pub on Saturday, March 5th at 4pm, and the second at Jesters Live before Creedence Clearwater Revisited takes the stage at 9pm Thursday, March 10th, both at Destination Daytona. Sneak peeks of the bike can be viewed below:

“Kuryakyn’s beautiful custom bagger classically represents the 35 years of world-class music, motorcycles, freedom and camaraderie folks have experienced at the Buffalo Chip,” said Buffalo Chip President Rod Woodruff. “The Rock, Rumble & Rebellion theme captures a perfect expression of adventure in style. My hat is off to Kuryakyn for a job well done. We’re delighted to be represented by this leading parts and accessories manufacturer.”

At the conclusion of Daytona Bike Week, the Rock, Rumble & Rebellion Road Glide and matching Epiphone guitar will hit the rally circuit before Kuryakyn ultimately hands the keys to the Buffalo Chip. The bike and guitar will serve as centerpieces of the 35th anniversary celebration held August 1-14, and will be showcased at the Buffalo Chip where both will be up for private sale.

The Rock Rumble & Rebellion theme leverages the energy and excitement that millions of bikers have experienced at the legendary campground since 1981. Kuryakyn infused an overall design aesthetic that evokes the timeless essence of motorcycles and music. From the tone-on-tone color palette, to the emphasis on pin striping and minimal use of chrome, this project also represents Kuryakyn’s evolution, as evidenced by their new product offerings and the revitalization of their brand image.

“We’re extremely thrilled to build a custom bike that represents 35 years of the biggest biker party in the world,” said Kuryakyn President Holger Mohr. “With our experience and design expertise that comes from 27 years in the industry, this collaborative project honors the Sturgis Buffalo Chip’s remarkable legacy while showcasing the creative vision, versatility and fresh energy behind the Kuryakyn brand. At the end of this ride, someone will own two one-of-a-kind pieces of music and motorcycle history. Kuryakyn is incredibly honored to play a role in that.”

Daytona Bike Week attendees are invited to come out to witness the unveiling and help kick-start the Sturgis Buffalo Chip’s 35th Anniversary celebration. The yearlong Rock, Rumble & Rebellion Tour starts at the Saints & Sinners Pub at Destination Daytona on Saturday, March 5, 2016 at 4pm.