Buffalo Chip, SD (Aug. 23, 2016) – The authentic rally tradition continued last week as motorcycle and music fans gathered to enjoy nine days of adrenaline-packed action and entertainment at the Sturgis Buffalo Chip®. As the center of activity and heart of the annual rally loyal fans joined friends from around the globe for a gathering of two-wheeled titans, top entertainers, fearless racers, freedom lovers and crazy characters for the 35th anniversary of “The Best Party Anywhere!®” 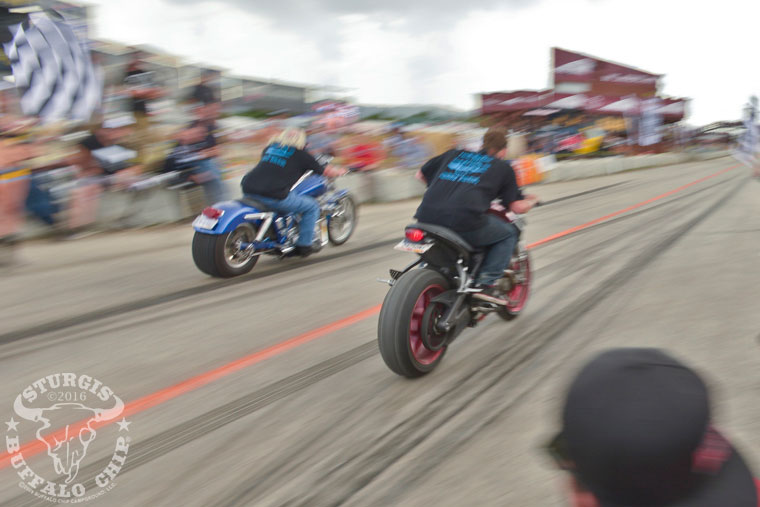 The Chip did the unbelievable by successfully tearing up the amphitheater to install a track for one day of moto-hijinks directly in front of its main stage. During one of the most celebrated events of the 2016 rally, the Buffalo Chip revived the racing that founded the rally, making for an epic day of music and races the rally has never before seen in one place. Spectators stood in awe as the spray of rubber and roar of horsepower from the Buffalo Chip’s Street Drag Invitational with Crazy John filled the amphitheater on Wednesday, Aug. 10. The crowd then received another shot of pure adrenaline as they shifted to the south side of the Chip’s amphitheater for a taste of authentic dirt track racing from the Roland Sand’s Design’s Super Hooligan Races presented by Indian Motorcycle. Moto Stampede events brought the attention of national media like Forbes, MAXIM, Road & Track and more. The day ended with high-profile after parties that lasted into the wee morning hours. 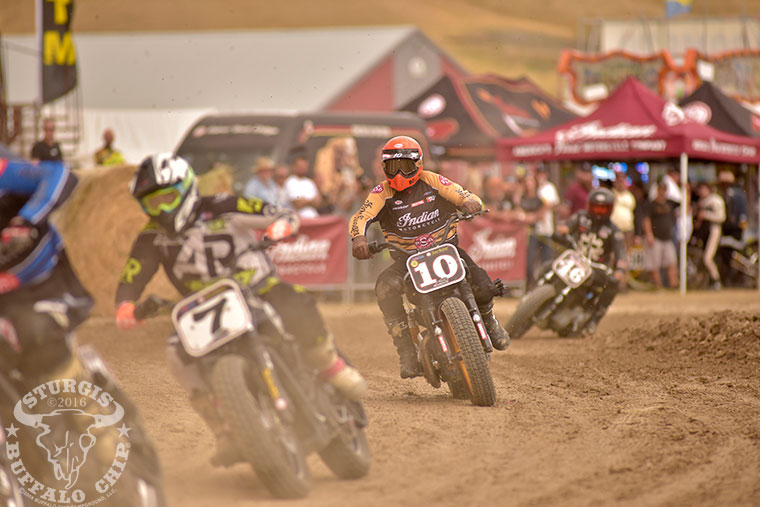 In a throwback to the days when young men tweaked their street machines into dirt track racers, Roland Sands Designs and Indian Motorcycles helped revive the thrill of Hooligan flat track racing at the Buffalo Chip’s Moto Stampede in the amphitheater. Brakes were optional as celebrity racers Roland Sands and Carey Hart joined a cadre of potential champions tearing up the Chip’s new dirt track constructed specially to host this event.

Chip stunt fan favorites the Seattle Cossacks joined in on the festivities, stacking riders high atop their vintage Harleys and capturing the hearts of appreciative audiences with their winning smiles and baffling moto-acrobatics.

Celebrities Turn Out for Charity 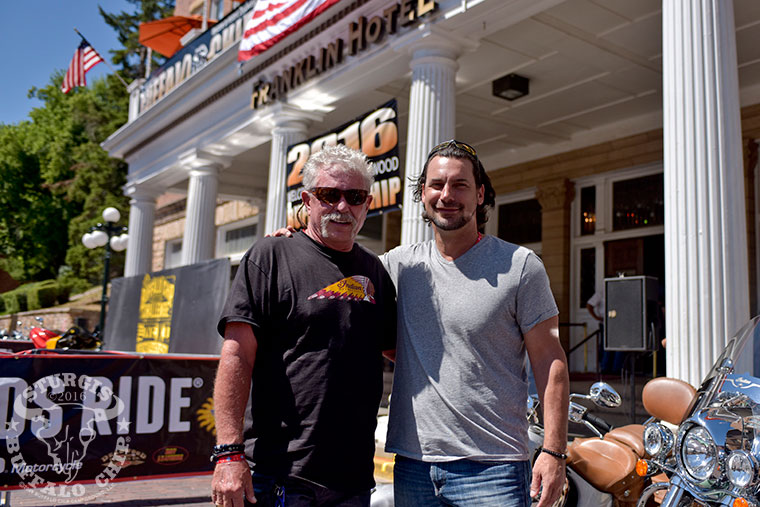 Motorcycle Masterpieces
Five days of bike shows outside the Big Engine Bar at the Buffalo Chip’s CrossRoads presented daily collections of some of the rally’s most amazing machines. Sponsored by Full Throttle Magazine, Biltwell, Easyriders Magazine, and ending with the famous Rat’s Hole, the 2016 shows offered a look at the bizarre, the creative and the traditional of the motorcycle world. Clint Ewing and crew added a stunt show laced with twists and smoking tire squeals, and Easyriders Magazine hosted an exciting auction of original art created by celebrated motorcycle artist David Mann on Wednesday, Aug 10. The 2016 Motorcycles as Art exhibit, “Skin & Bones, Tattoo Inspired Motorcycles and Art,” curated by famed photographer Michael Lichter, drew an appreciative audience. The museum-quality exhibit, open free to the public, included stunning works of motorcycle art from 32 builders and 20 artists from around the world.

The Beat Goes On 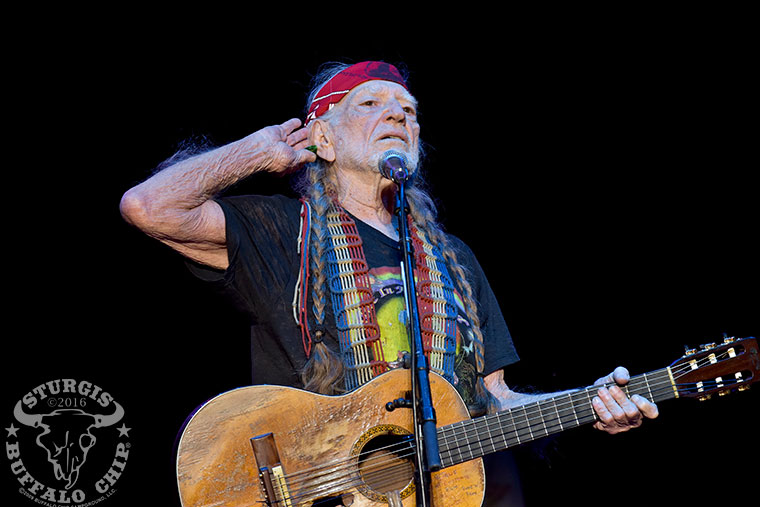 An eclectic array of the world-class entertainers filled the 2016 Buffalo Chip’s concert schedule, giving guests an opportunity to enjoy the both living legends and today’s up and comers. The festival opened with the legendary Willie Nelson who offered up a long list of hits, and it concluded with the hilarious musical antics of “Weird Al” Yankovic. Award-winning country star Miranda Lambert topped off the Chip’s 30th annual Freedom Celebration, Lynyrd Skynyrd declared themselves the Buffalo Chip’s house band and Five Finger Death Punch hit the audience with a power-packed performance. Kid Rock shook the house down performing a full show after a near two-hour rain delay that didn’t dampen anyone’s enthusiasm for the star. 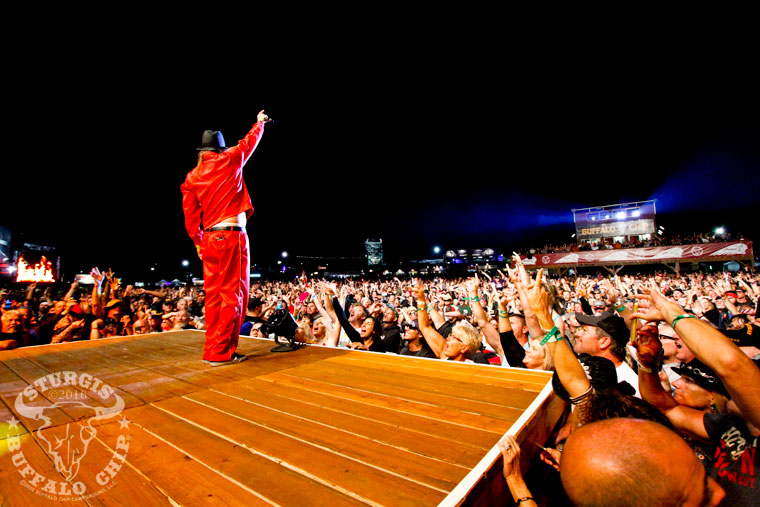 “It’s hard to believe we’ve now celebrated 35 years of ‘The Best Party Anywhere,’ ” said Rod Woodruff, Sturgis Buffalo Chip President. “What an incredible year we’ve had with our friends. From the main stage performances to the Moto Stampede races, rides and celebrity appearances, it was fantastic. And now we’re ready to start it all over again for 2017!”

The Buffalo Chip has already begun making preparations for the 2017 festival. Passes for the event are on sale and may be purchased at www.buffalochip.com.

About The Sturgis Buffalo Chip
The Sturgis Buffalo Chip is the Largest Music Festival in Motorcycling™.Established in 1981, the venue’s nine-day festival, known as The Best Party Anywhere®, remains one of the world’s most televised and longest running independent music festivals. Buffalo Chip guests have the freedom to party and play while experiencing world-class concerts, outrageous events, moving freedom celebrations, thrilling PowerSports and more. Located three miles east of Sturgis, SD on 600 creek-fed acres, it offers cabins, RVs, camping, a swimming hole, bars, mouth-watering food, showers, paved roads, and more to visitors traveling from all corners of the world. The Chip’s concerts are free with camping. More details are available at www.buffalochip.com.