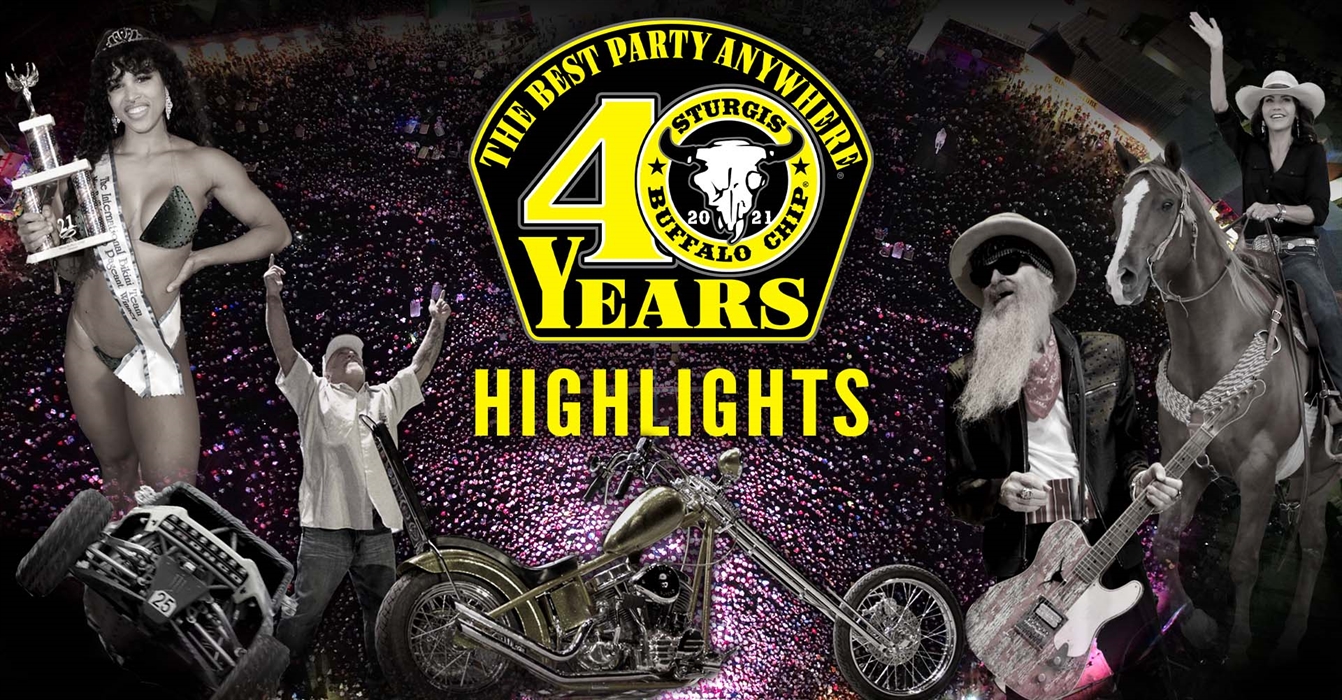 The original venue to bring together music and motorcycles during the Sturgis Rally turned the BIG 4-0 this year. Suffice it to say, everyone anticipated the party celebrating this milestone would be one for the history books. Riders, rockers, celebrities and gawkers from across the globe all made their way to the legendary Sturgis Buffalo Chip® expecting that the Best Party Anywhere® would truly deliver on its name for the anniversary. And it did. Here were some of the highlights… 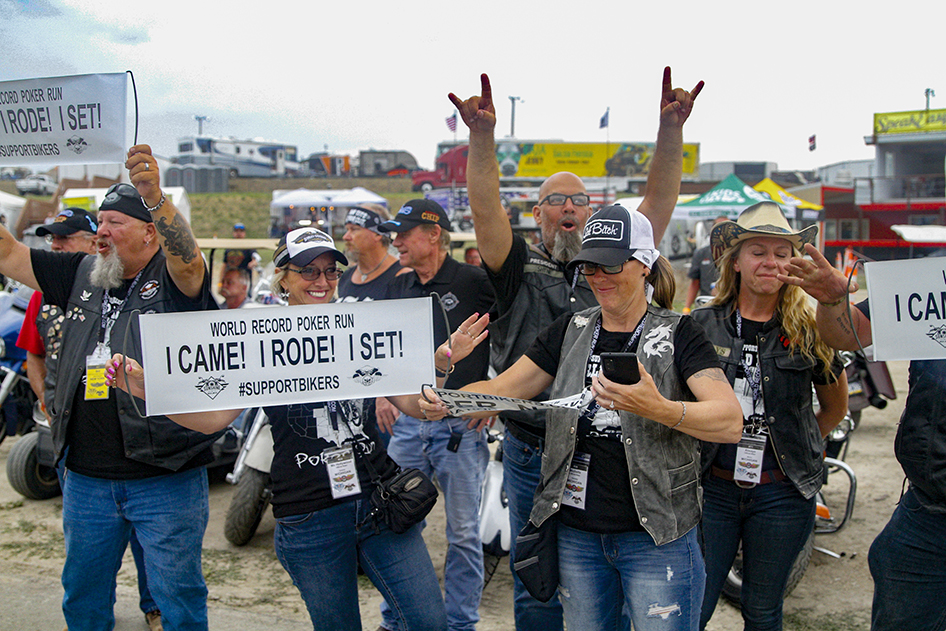 Support Bikers made history when they rolled through the Buffalo Chip’s Welcome Home Bikers gates on Friday, Aug. 6 to break the world record for the longest motorcycle poker run. The ride kicked off July 29 in Port Charlotte, Florida and made stops in Georgia, Arkansas, Colorado, and Wyoming before the final card pull party at the Chip. The record to beat was 3,123 miles with six people. This poker run set the new world record with a whopping 3,300 miles and 110 people.

See more folks who made the trek to the Best Party Anywhere in 2021 in the Buffalo Chip’s People of the Chip Photo Gallery! 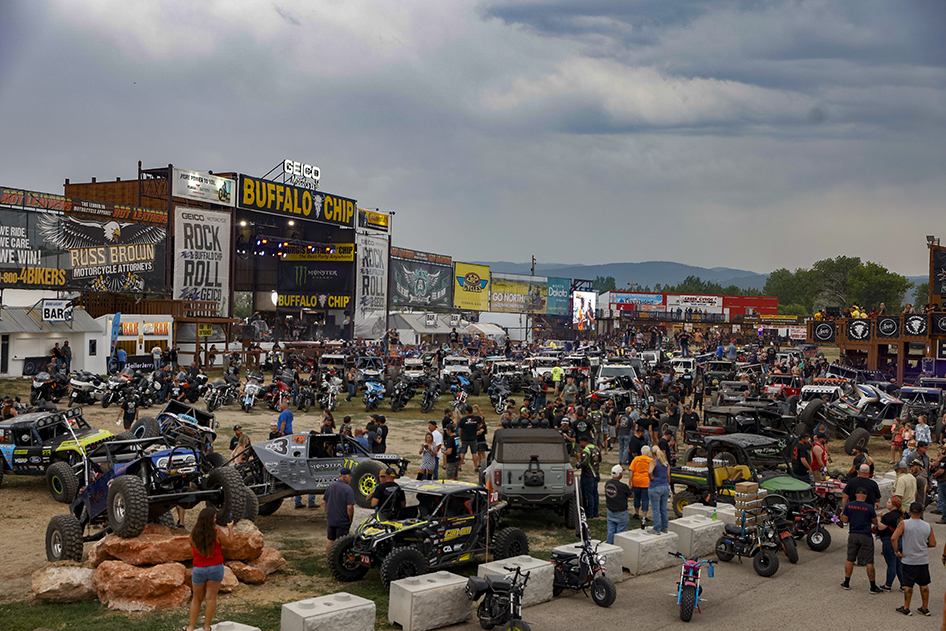 There was no such thing as being fashionably late this year. The party began with a bang on Friday, Aug. 6 with the first-ever Buffalo Chip Official Sturgis Rally Kickoff. Guests experienced the spectacle as countless custom motorcycles, Ultra4 off-road rigs and famous faces make their grand entry in a miles-long parade down Buffalo Chip Main Street to fill the venue’s legendary amphitheater. 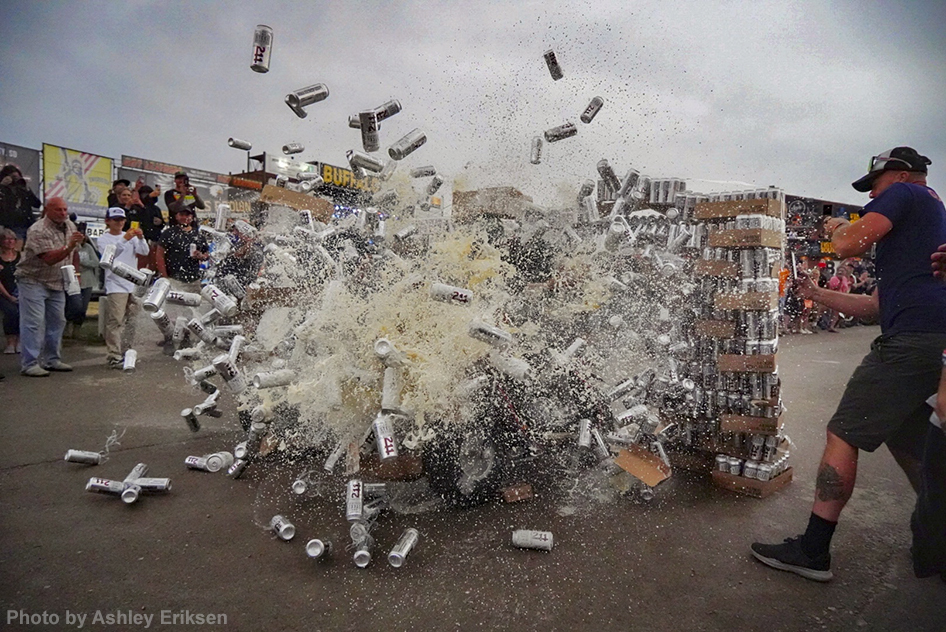 The bikes were little, but the explosion was big when Big Joe Mielke and Daymon Woodruff blasted through a wall of Steel Reserve during the Sturgis Rally kickoff party. Hundreds of tallboys met their match when the riders’ mini bikes outfitted with ramming plates simultaneously hit the wall at top speed. Guests in attendance were happy to assist with cleanup, finishing up all the sacrificial remains.

A special and totally unexpected moment occurred when Big Skillet covered the original Ross & Rotten song “Sleeping with my Butt to the Wall” as a tribute to longtime Buffalo Chip emcee Hank Rotten. To everyone’s surprise, Hank came out on stage and sang the song along with the band in commemoration of his final year as emcee on the Wolfman Jack Stage. It was the first time Hank had sung this song on the Chip stage in over a decade.

During a time when so many fans have been unable to scratch their live music itch, Buffalo Chip guests got the rare opportunity to see some of the biggest names in music return to the stage. Acts including Kid Rock, ZZ Top, Shinedown and many others brought countless riders, partiers and music enthusiasts into the Chip’s natural outdoor amphitheater.. 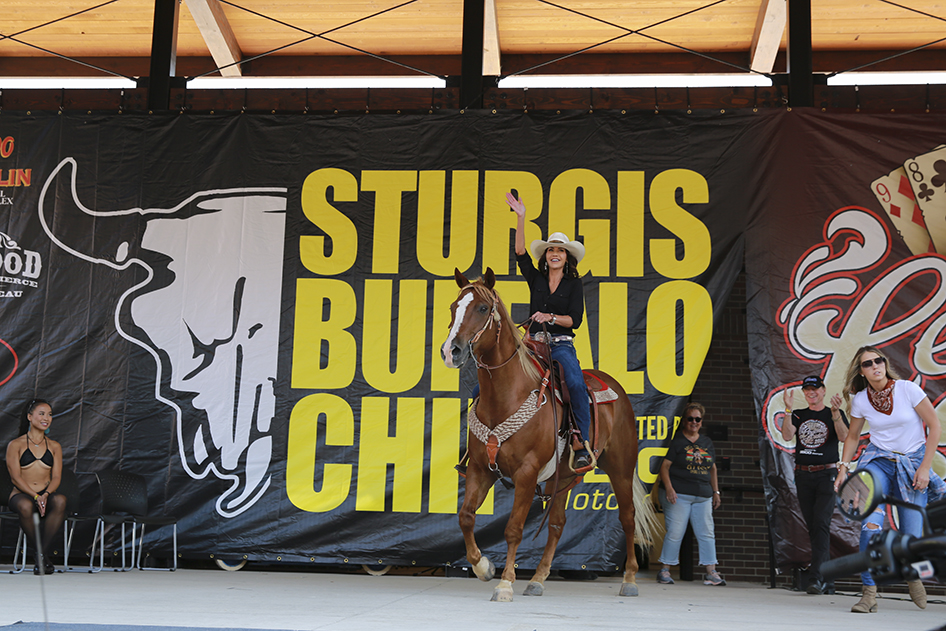 The generosity of riders was on full display during the Buffalo Chip’s 14th annual Legends Ride on Monday, Aug. 9. A record amount of funds—$141,500 to be exact—made its way to worthy South Dakota charities thanks in part to the presence of South Dakota Governor Kristi Noem. Noem joined the festivities in Deadwood riding her horse, Ice Man, to help auction off David Uhl’s “True Grit” paint-over print to raise money for Treasured Lives. The stunning work of art features the two participating in the Custer State Park Buffalo Roundup. 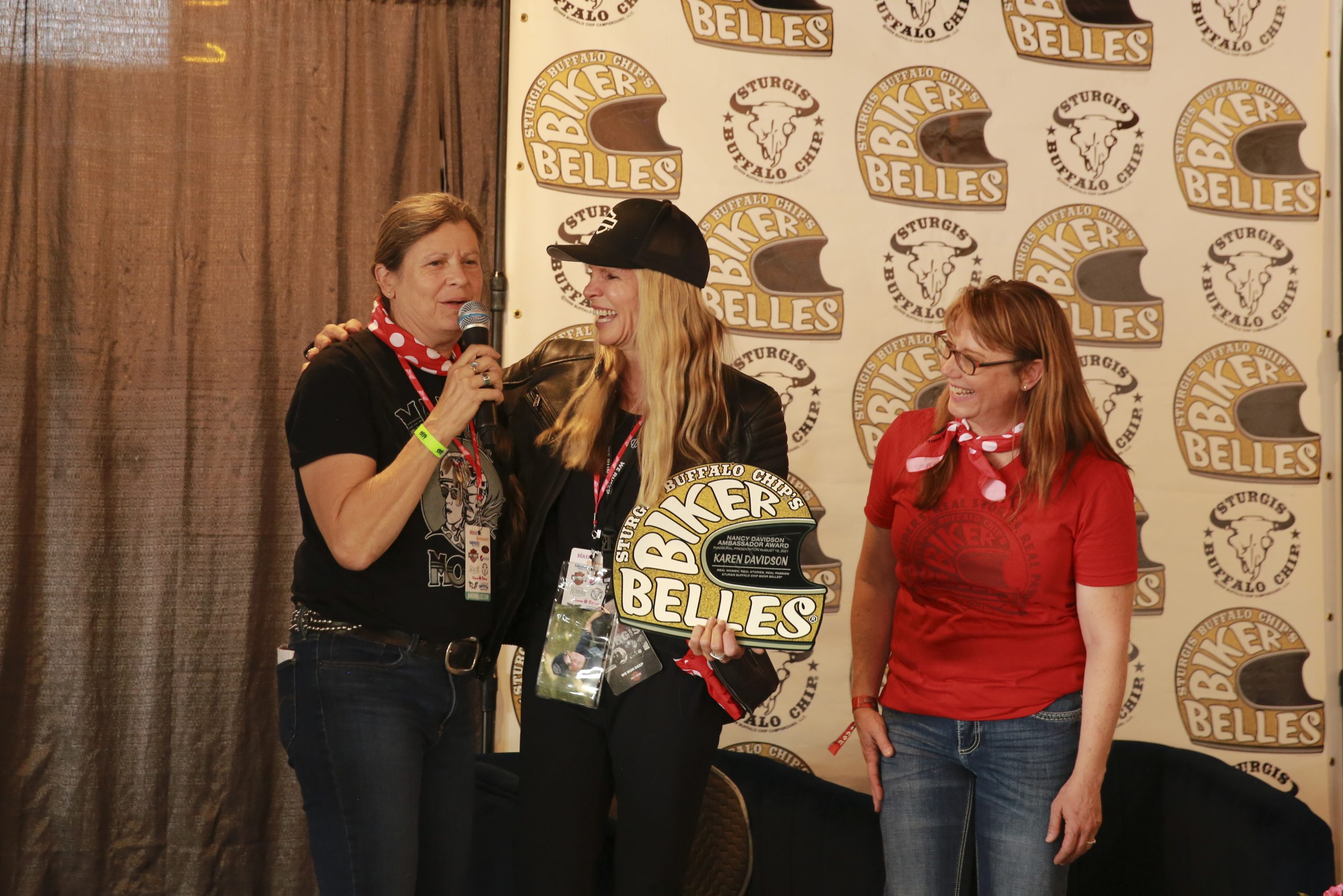 In honor of the first lady of motorcycling, the Buffalo Chip’s Biker Belles developed the Nancy Davidson Ambassador Award and incorporated its presentation into their 13th annual day of celebration. The award recognizes women who have acted in supportive and partnership roles of guiding, building and leading the motorcycle industry. Recipients exemplify Biker Belles’ mission to raise awareness of women in motorcycling and celebrate their role in shaping the sport. Biker Belles felt there was no woman more suitable to receive the inaugural award than Nancy’s own daughter, Karen Davidson. 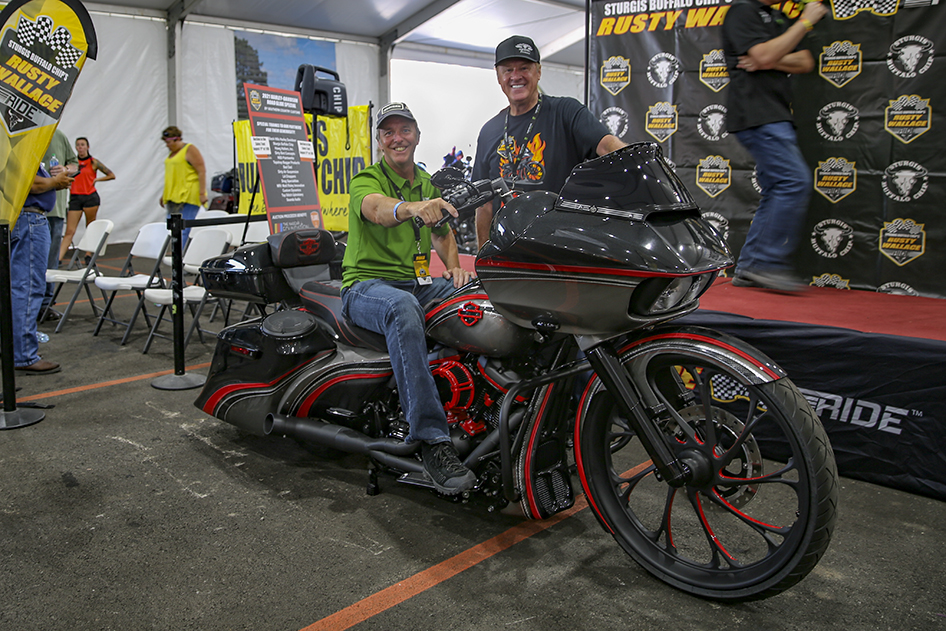 Participants in the Buffalo Chip’s 3rd annual Rusty Wallace Ride could barely get auction bids in fast enough once they laid eyes on the custom 2021 Harley-Davidson Road Glide built by Rusty Wallace and his son Steve of Southern Country Customs.

A serious bidding war erupted when this incredible machine rolled onto the auction block—each bid raising more funds for The NASCAR Foundation and South Dakota Special Olympics Rapid City Flame. In the end, a $90,000 bid closed the auction, and the outbid party threw in $10,000 to make the donation an even $100k!

Step inside this event by checking out the Buffalo Chip’s Rusty Wallace Ride Photo Gallery!

ZZ Top Took the Stage with Elwood Francis on Bass 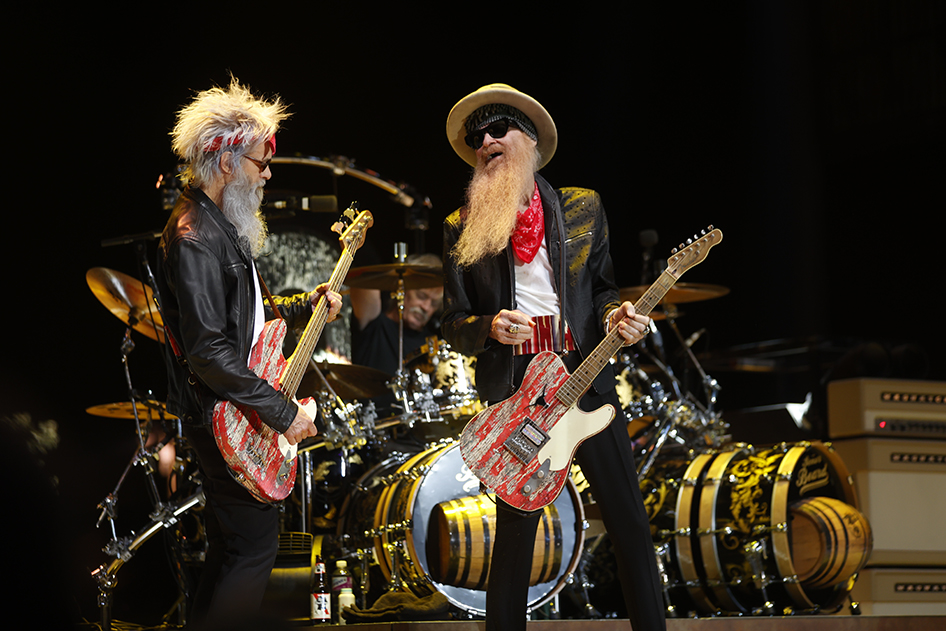 The entire music community was gutted to learn that rock ‘n’ roll legend Dusty Hill had passed away in late August. The loss had also left many Sturgis Rally-goers wondering if the show would go at the Buffalo Chip. Much to everyone’s excitement, long-time guitar tech and friend of the band Elwood Francis honored Dusty by sitting in on bass so the show could go on. 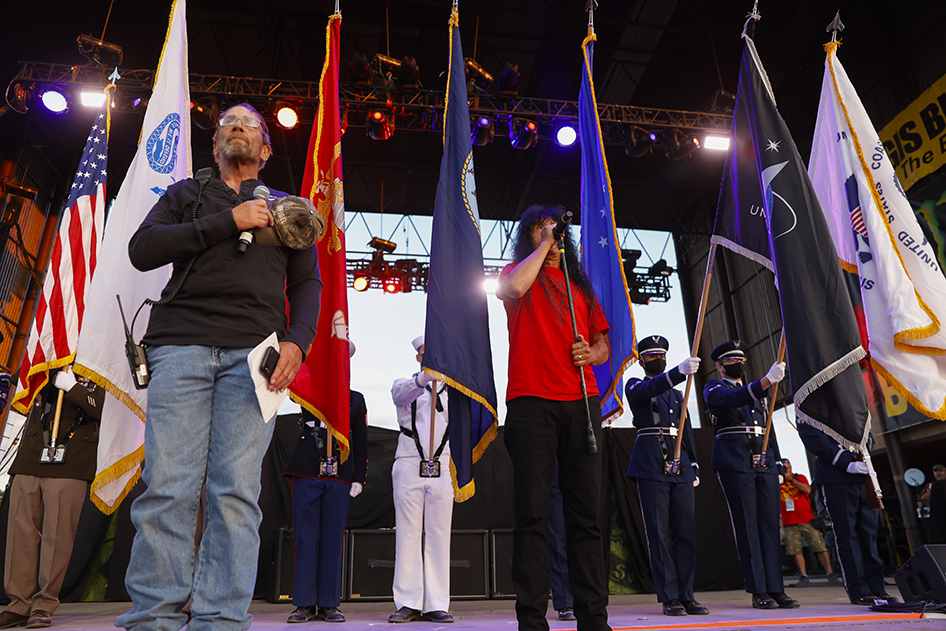 Supporting soldiers has long been a tradition at the Buffalo Chip. The 2021 Sturgis Rally marked the 30th year of the Chip’s annual Freedom Celebration, and this milestone deserved all the fanfare the Buffalo Chip could muster. To kick off this day of acknowledgement for those who have served, a military branch color guard presented the colors followed by to an unforgettably moving rendition of the Star-Spangled Banner from Anthrax singer Joey Belladonna.

Experience more of the Freedom Celebration in the Buffalo Chip’s Freedom Photo Gallery! 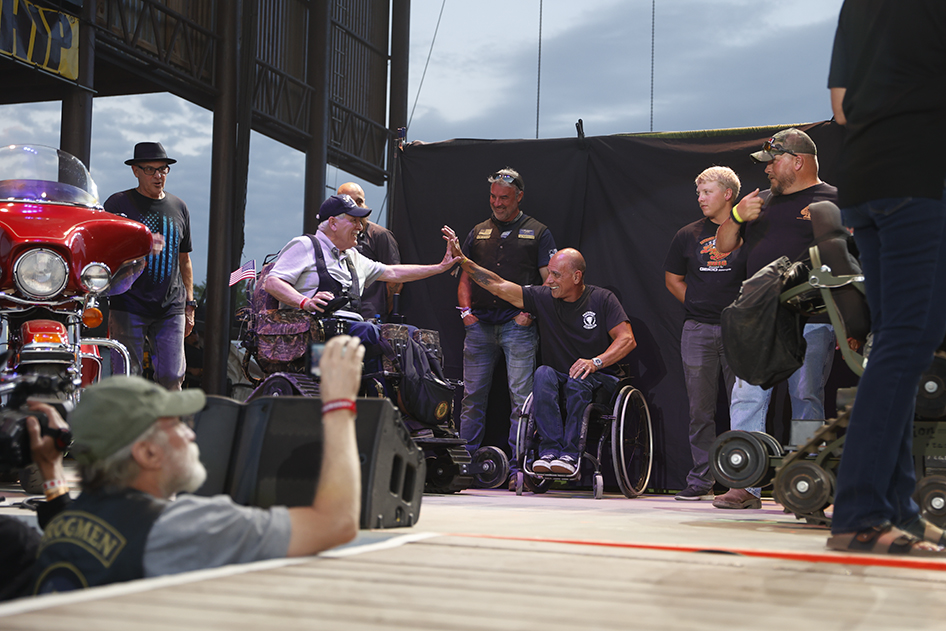 Among the powerful presentations given on stage during the annual Freedom Celebration was the 2021 Veteran’s Bike Presentation. This year, retired Navy SEAL and Purple Heart recipient Carlos Moleda received a specially modified 1998 Harley-Davidson Ultra Classic Electra Glide with an HD sidecar.

Carlos was hit near his spine and leg during an intense firefight in Panama, causing him to lose feeling in his lower body. Since the injury, Carlos has become a world-renowned athlete. He has achieved many great feats including climbing Mount Kilimanjaro and becoming a seven-time Ironman National Champion and five-time Ironman World Champion. Now Carlos has also achieved his longtime dream of owning a classic Harley with a sidecar.

Charlie Brechtel’s Legacy Lived On Through the Golden Chopper 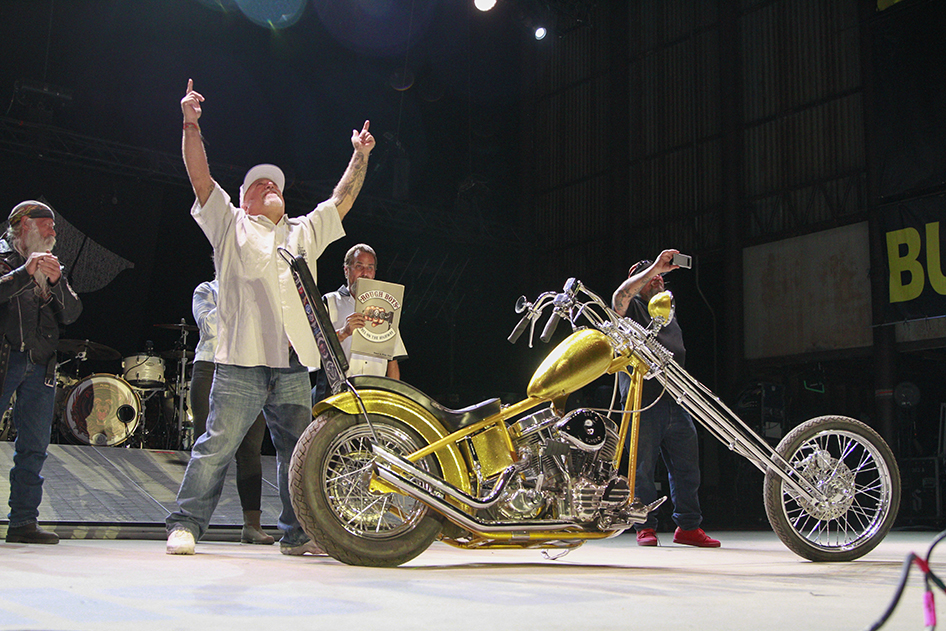 When “Good Time” Charlie Brechtel passed away in 2020, he left a crater-sized hole in the hearts of the motorcycle community. He also left behind the most perfect chopper ever built (so the legend went). This 1961 Panhead was created as part of Charlie’s second motion picture, “Rough Boys.” The film’s storyline was to reveal clues leading viewers on a scavenger hunt that ended at the Golden Pan and $10,000.

When Charlie’s tragic death prevented the movie project from moving forward, the decision was made to use the bike to help preserve motorcycle history, raffling it off in support of the Sturgis Motorcycle Museum. On Friday, Aug. 13, Charlie’s friends paid him tribute by drawing the lucky winner’s name on the same stage Charlie had performed for over a decade.

More amazing custom motorcycles are waiting for you in the Buffalo Chip’s 2021 Motorcycles Photo Gallery! 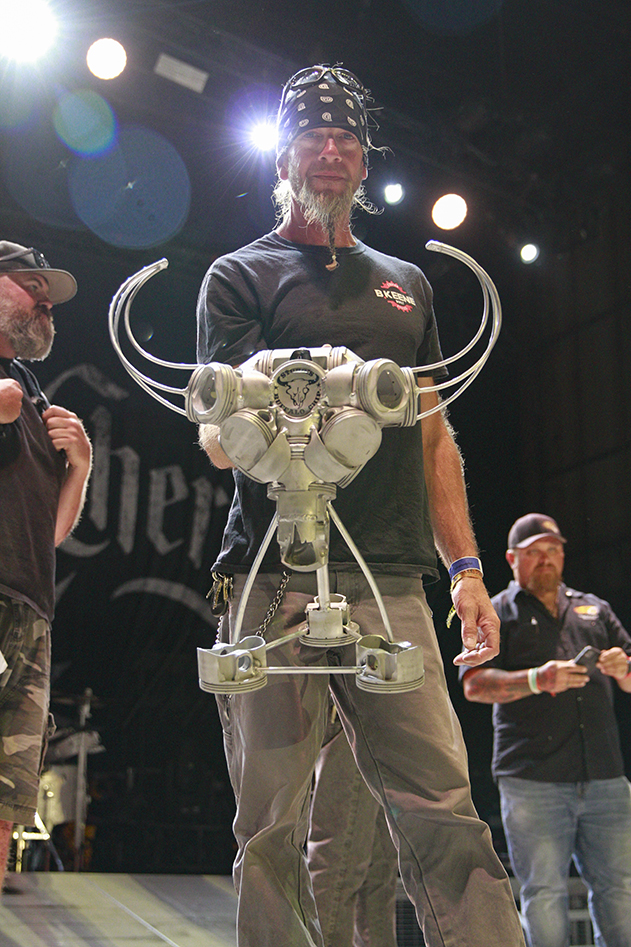 For the first time ever, the Chip pitted the best in show winners from each of its nine bike shows against one another to compete for the title of Custom King of the Sturgis Buffalo Chip. The promoters from each individual show scrutinized all of the winners, and when the votes were tallied, Brandon Keene came out on top. The custom trophy was handcrafted by Joe Mielke of Snap Fabrications. 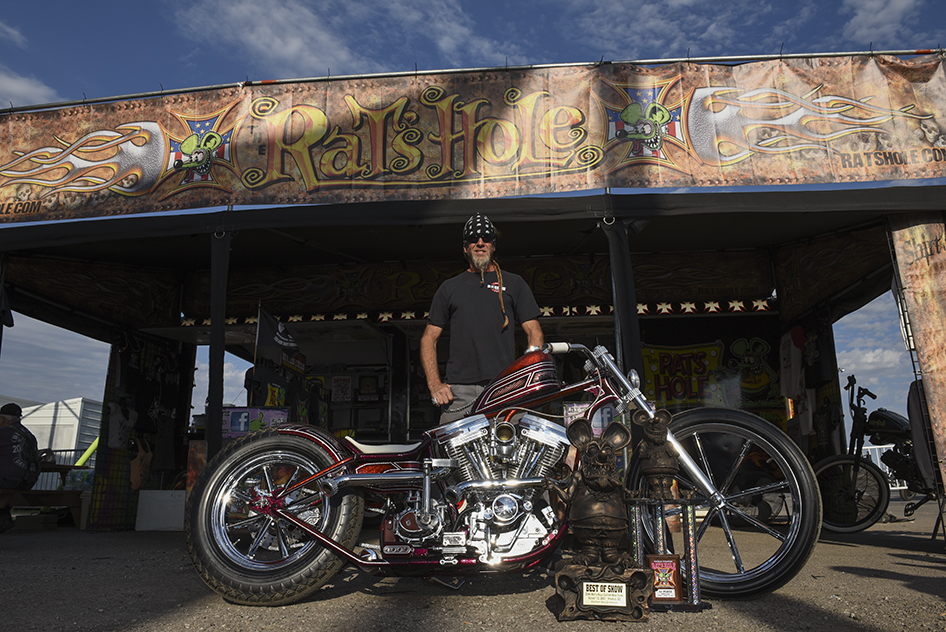 Brandon’s 1984 HD Evo Softail had won Best in Show in both the Rat’s Hole Show and the Evo Entanglement Show. In addition to major bragging rights, Brandon was called onto the Buffalo Chip’s legendary Wolfman Jack Stage to receive his prestigious award hand crafted by Joe Mielke of Snap Fabrications. 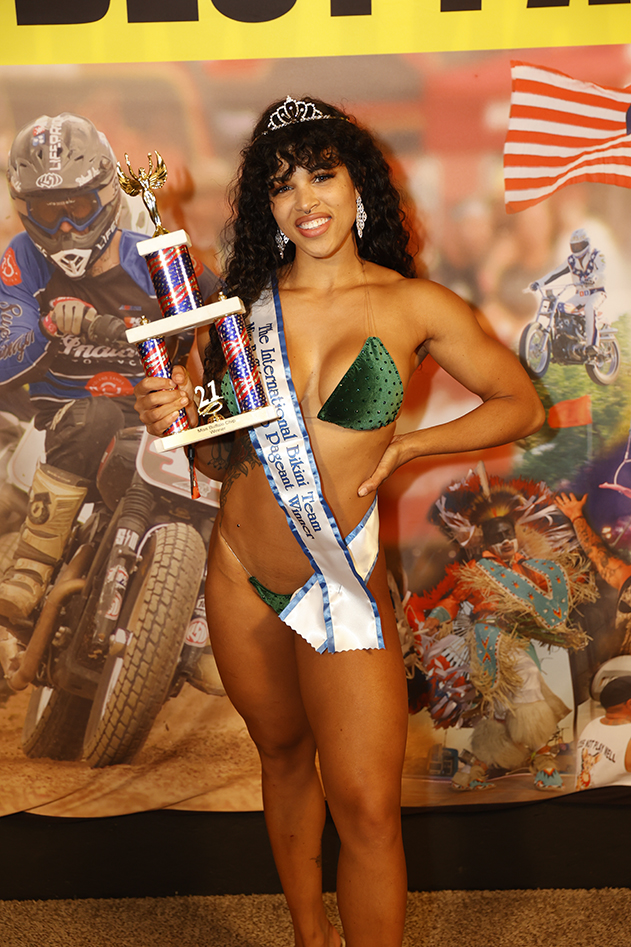 Over 20 drop-dead gorgeous members of the International Bikini Team made their way to Sturgis to compete for the title of Miss Buffalo Chip 2021. After nine days of stiff competition on the Buffalo Chip Main Stage the judges selected Aianna Buist as the winner. She had been competing in the pageant since 2016 and had hoped this would be her year to win, as she intends to attend grad school and wanted to go out with a bang.

Want to experience unforgettable moments at the Buffalo Chip during the 2022 Sturgis Rally? Start planning your trip now!

Passes to the Best Party Anywhere go live on Sept. 27, 2021! Explore your camping options now, because coveted RV camping areas, cabins and RV rentals are sure to go FAST!

Want to experience unforgettable moments at the Buffalo Chip during the 2022 Sturgis Rally? Start planning your trip now! 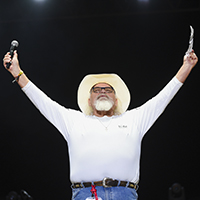 Presented by the Sturgis Buffalo Chip

Known as The Best Party Anywhere®, the Sturgis Buffalo Chip believes festivals should be fun like a high five, reenergize you like a broken rule, and romance you like someone you just met and have to take home.