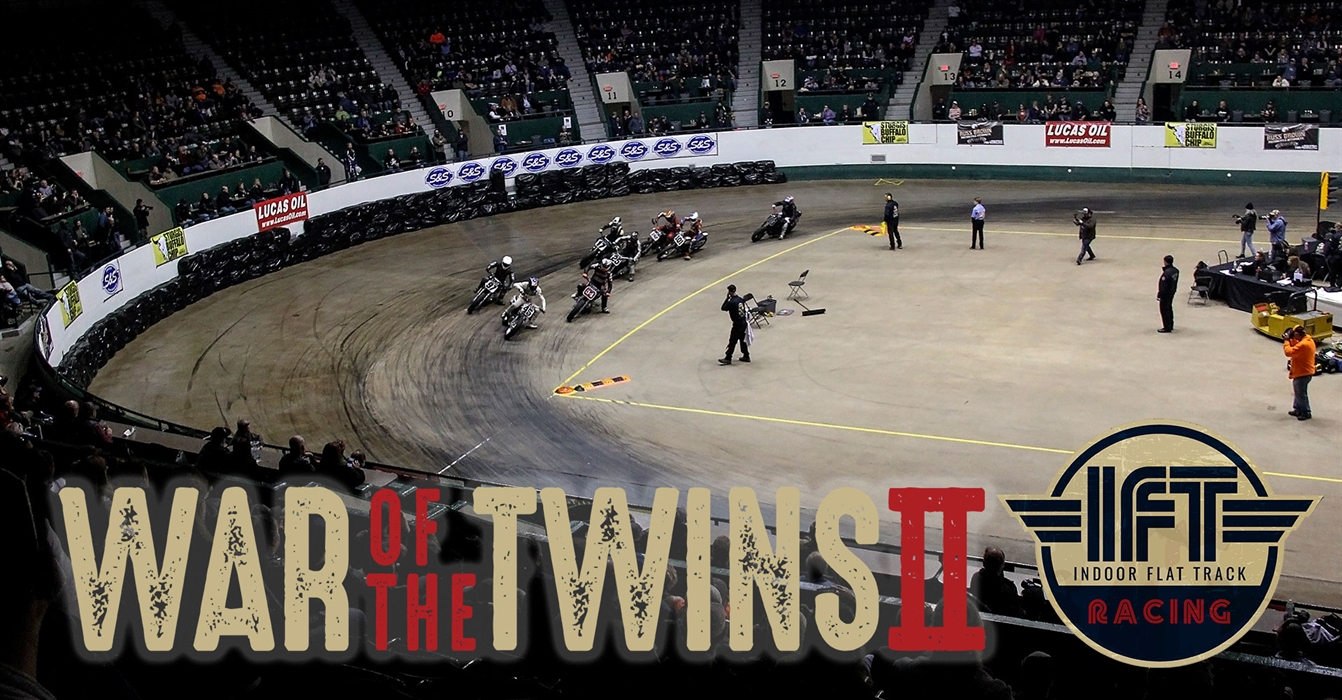 Twin City flat track fans flocked to the Rose Lee Warner Coliseum in Minneapolis to witness the second episode of Indoor Flat Track racing’s “War of the Twins” on March 22. Three hours of competitive handlebar bashing and bumping kept the audience on the edge of their seats as dozens of racers fought for the lead on the tight concrete oval. Relive the non-stop action or see what you missed by checking out some of the standout moments from the event. 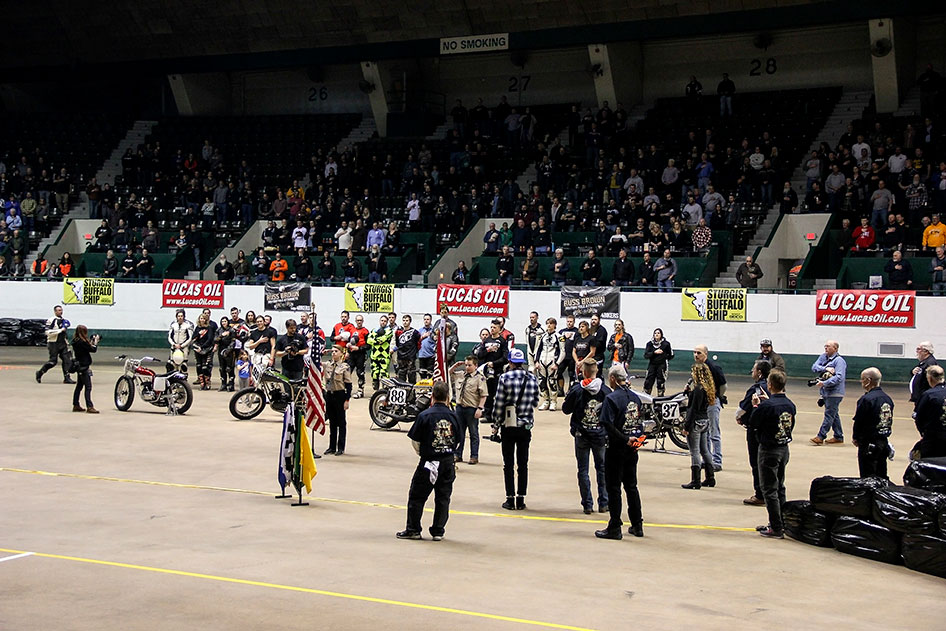 The main event kicked off with a procession of racers congregating in the oval for a flag ceremony performed by local Boy Scouts. A beautiful rendition of the National Anthem was sung before the roar of motorcycle engines filled the concrete dome. 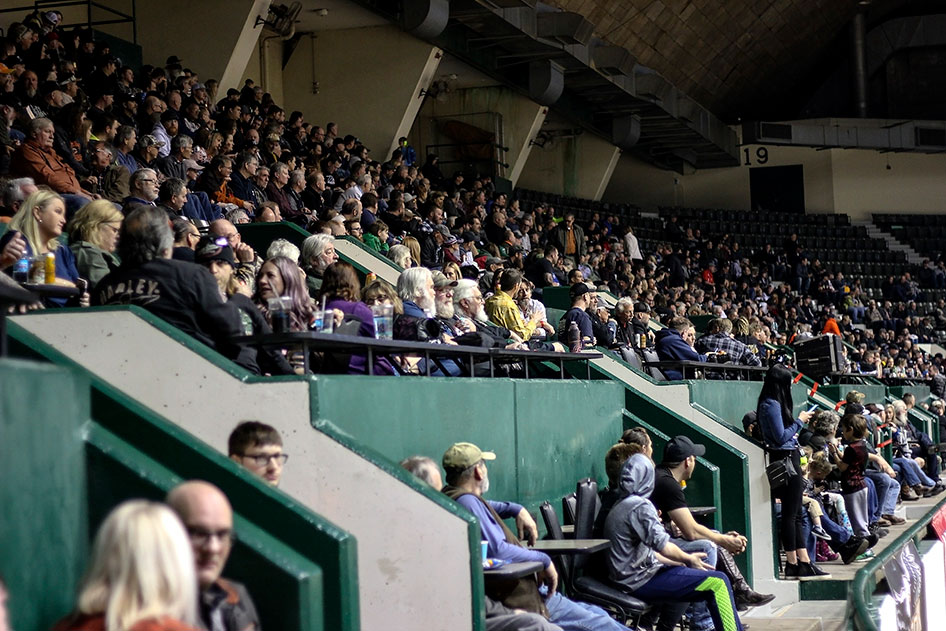 People of all ages filled the crowd to witness the second annual race. Fans packed the private boxes, and everyone watched eagerly for an exciting pass or a wild crash. 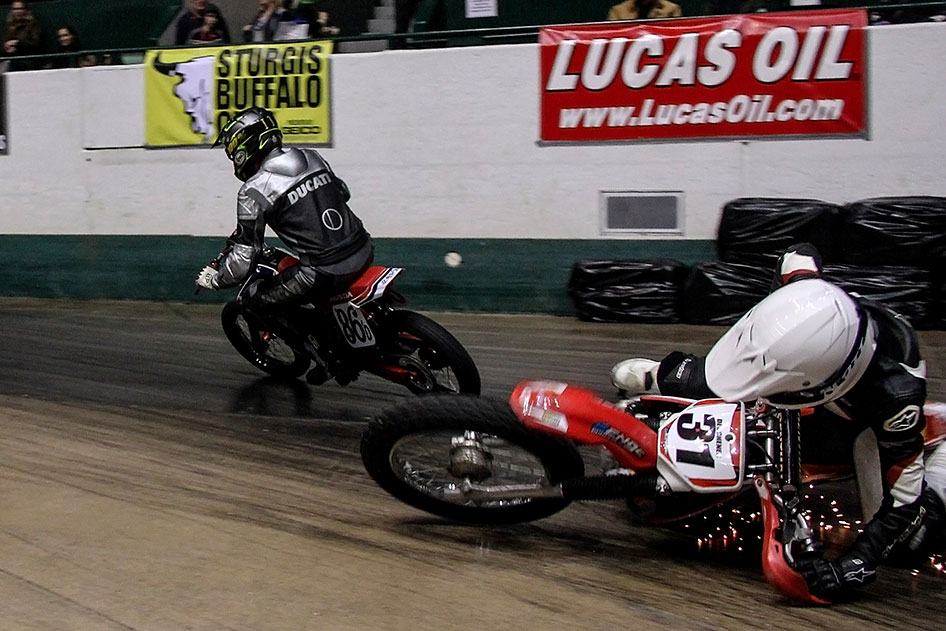 Eight classes of racing brought a variety of race bikes and riders who delivered non-stop action as they climbed the ranks toward the coveted checkered flag. The competition was stiff, and with the tight turns and short straights of this indoor concrete track, many bumps and touches turned into all out slides across the pavement. Sparks flew as this racer went down and got left behind after coming out of a hard-fought turn two. 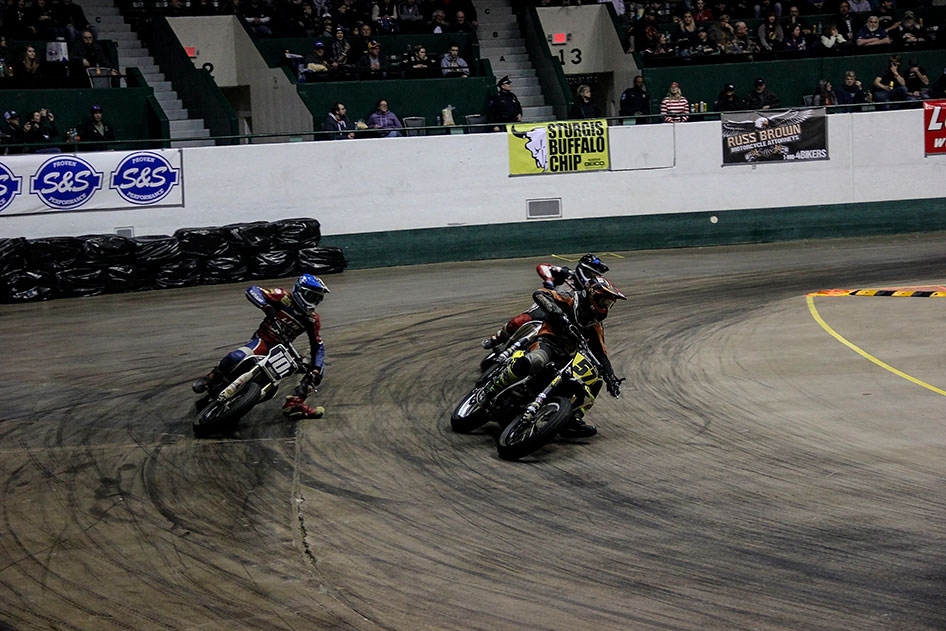 The amateurs were hungry, but the Pro-Singles class was a sight to behold with racers getting low and fighting for the perfect line around the track to edge out the competition. 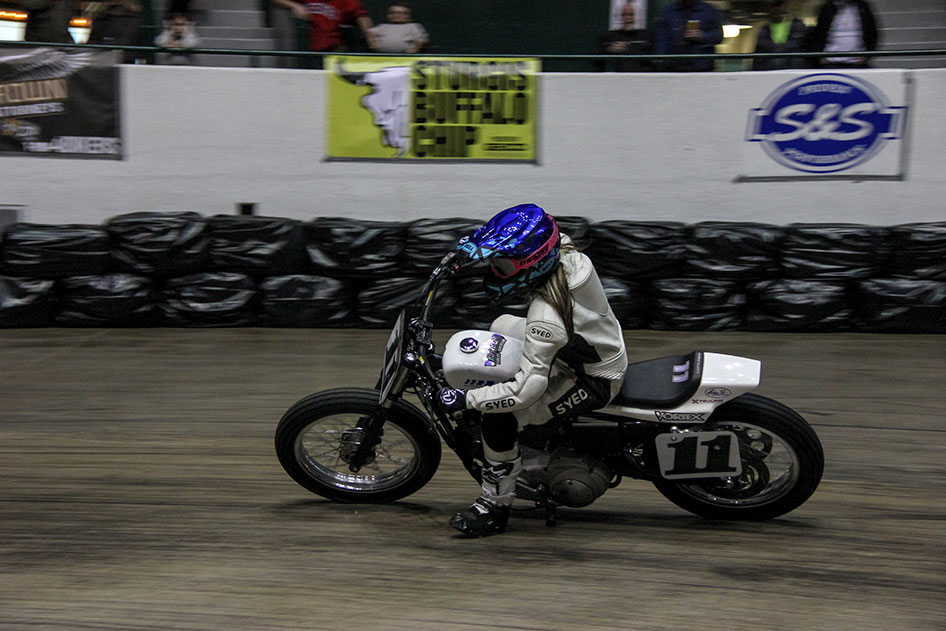 An all-women class was another fan favorite with local female riders gaining huge cheers from the crowd. There was no throttling back for these ladies, and it’s safe to assume this class will continue to add to the action at Indoor Flat Track races in the future. 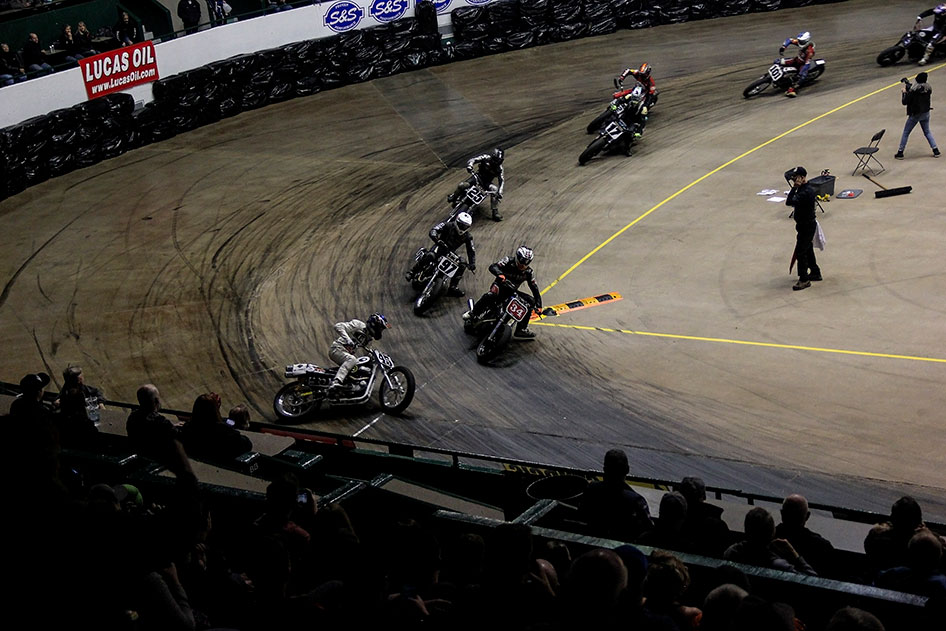 The class that everyone came to see was the Twins, who fought a hard war for their checkered flag. Even after taking the holeshot, racers couldn’t expect an easy win, as JJ Flairty found out after losing traction and going down in the main. 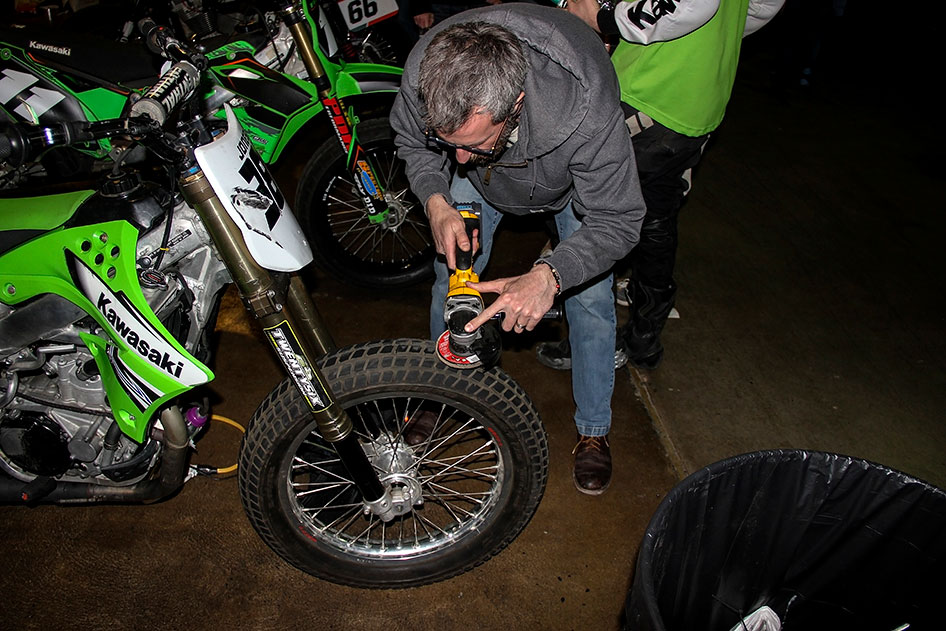 Stepping out of the arena and into the concourse put you right into the racers’ pit area. Here you could see riders and support team preparing their bikes for the race and reliving races just run in hopes of gaining an advantage on their next go. 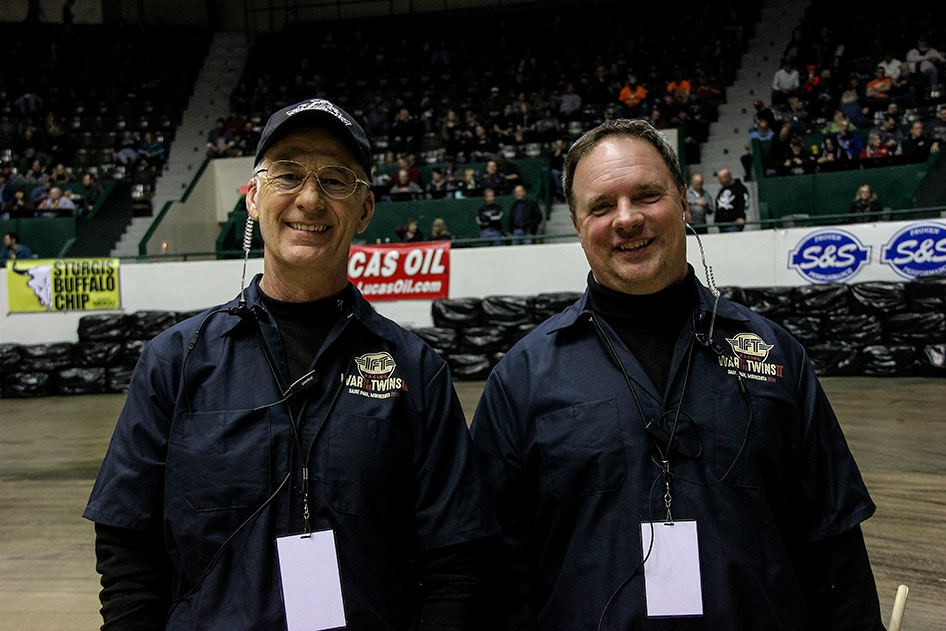 The whole race series was extremely well run and the safety staff was on-point to caution flag the track and clean up any fluids that spilled out when riders went down. Thanks to all the staff and volunteers who helped put on the event and keep the action going. 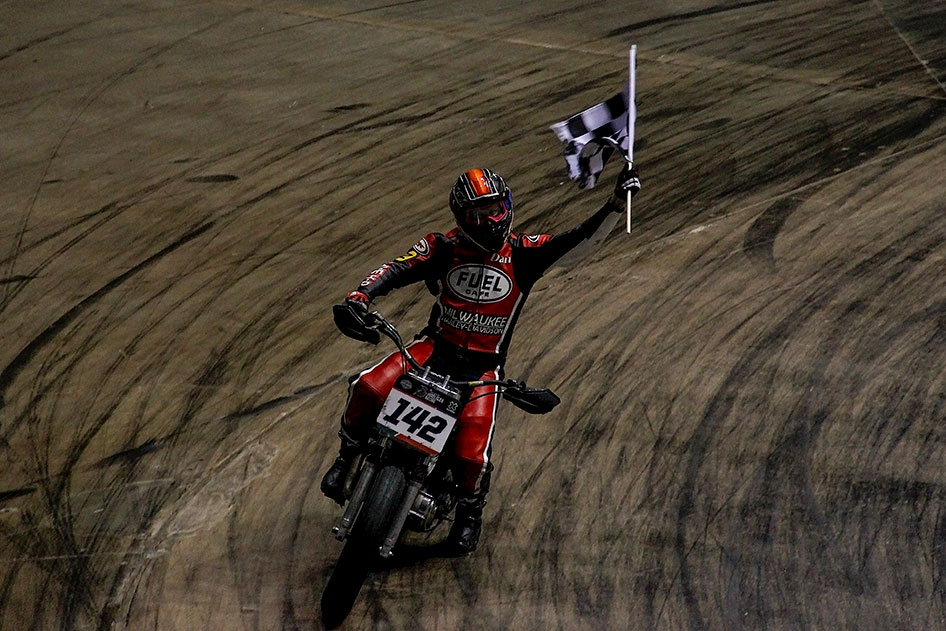 The night ended with only a few taking the victory lap with the checkered flag. But absolutely everyone was stoked to have had the chance to take a run at it. The War of the Twins II was a great success, and we are already looking ahead to next year for more Indoor Flat Track racing action in the Twin Cities.

Check out the video below for more highlights from the event.

Highlights from Indoor Flat Track’s WAR OF THE TWINS II

The War of the Twins II was an exciting way to kick off a weekend centered around mean motors and people who love them. Check out Scratching Your Winter Motorcycle Itch at the Donnie Smith Show (hyperlink to blog) to see some of the standout moments from the two days of motorcycles and cars that followed the races.

Were your friends or family racing in the War of the Twins? Or were you in attendance as a fan? Tell us who your favorite racers and races were in the comments below. 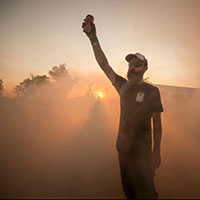 Presented by CAMP ZERO
Forget everything you think you know about the Sturgis Motorcycle Rally and start from ZERO.

CAMP ZERO is the launch site for raising hell and rallying like the old days—a place where you can party like it’s 1981 with other cheapskates who love rad bikes, dirtbag friends and wild parties.

At CAMP ZERO you’ll have everything you need to party, rinse and repeat, without all the fancy red carpet stuff you gotta pay more for somewhere else.

As long as you’re down with a little dirt and debauchery, you’re invited. (Grumpy old bikers need not apply.)

Find out more at CAMP ZERO