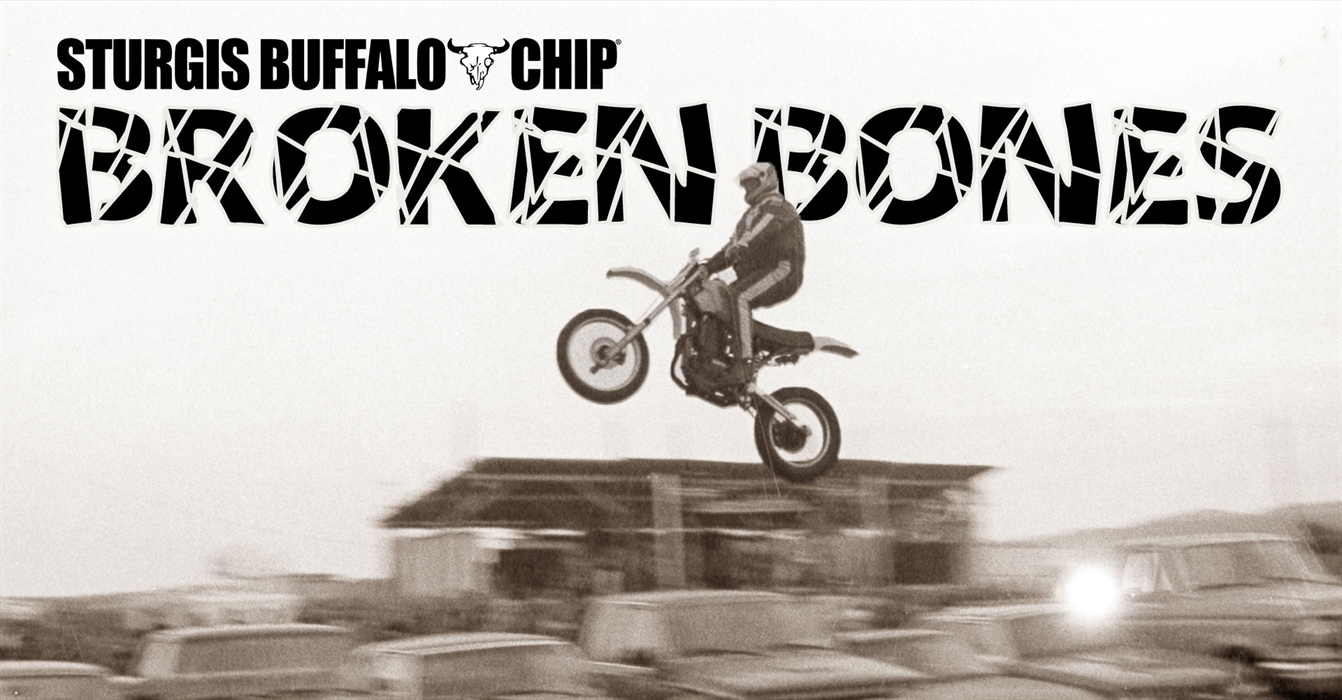 Broken Bones of the Chip

There are two types of people in this world: those who play it safe and bikers. We bikers, know that taking risks opens the door to adventure; it lets us live life to the fullest and gives us the opportunity to have it all, even if it can earn us a few bumps, bruises and broken bones along the way. As a venue built By Bikers, For Bikers®, the Sturgis Buffalo Chip® has welcomed countless risk takers over its 36-year history, but a few motorcycle daredevils have truly taken their risks to the next level. Here are there stories: 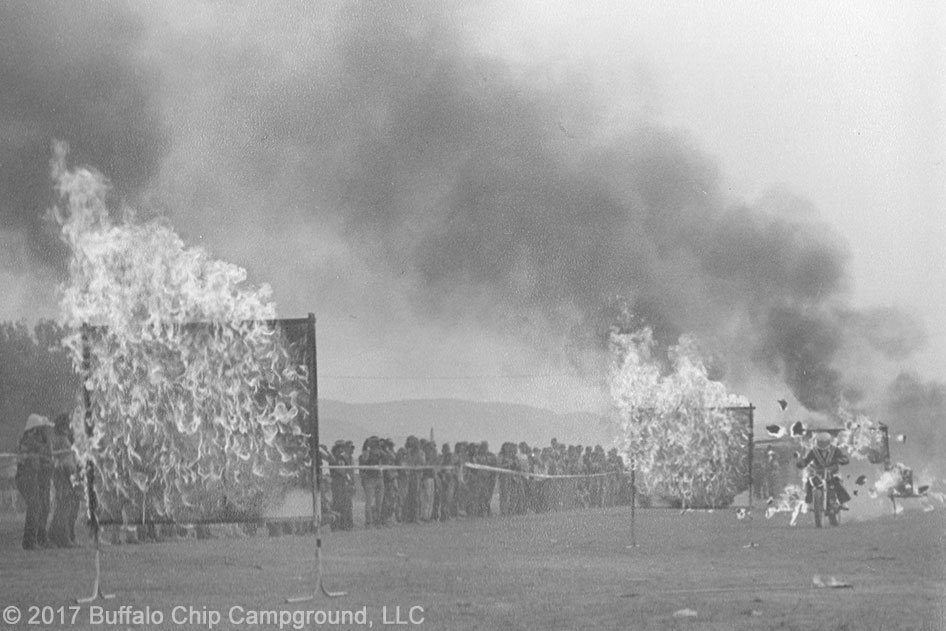 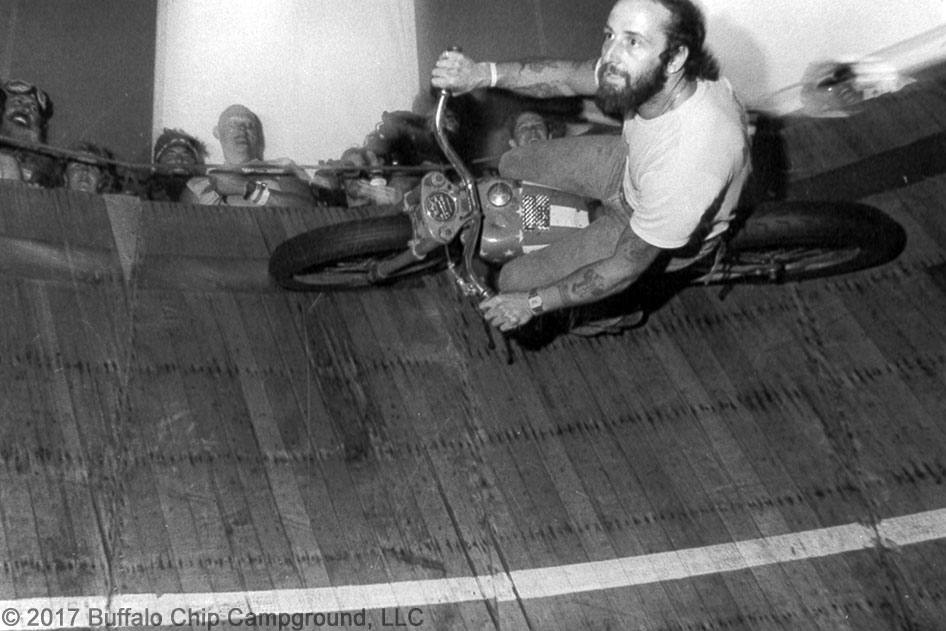 Don Dupre Sr. defied gravity by flying around one of the first infamous Walls of Death to set up at the Chip during the rally. 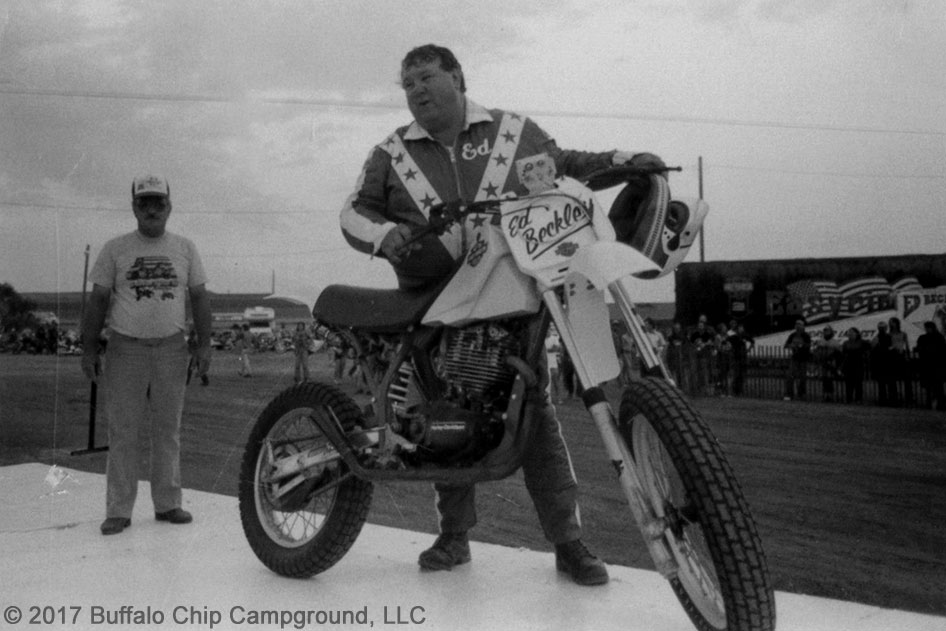 Big Ed Beckley, the “World’s Largest Motorcycle Jumper,” showed that it sometimes takes a big man to pull off a big stunt at the Chip during the 1989 Sturgis rally. 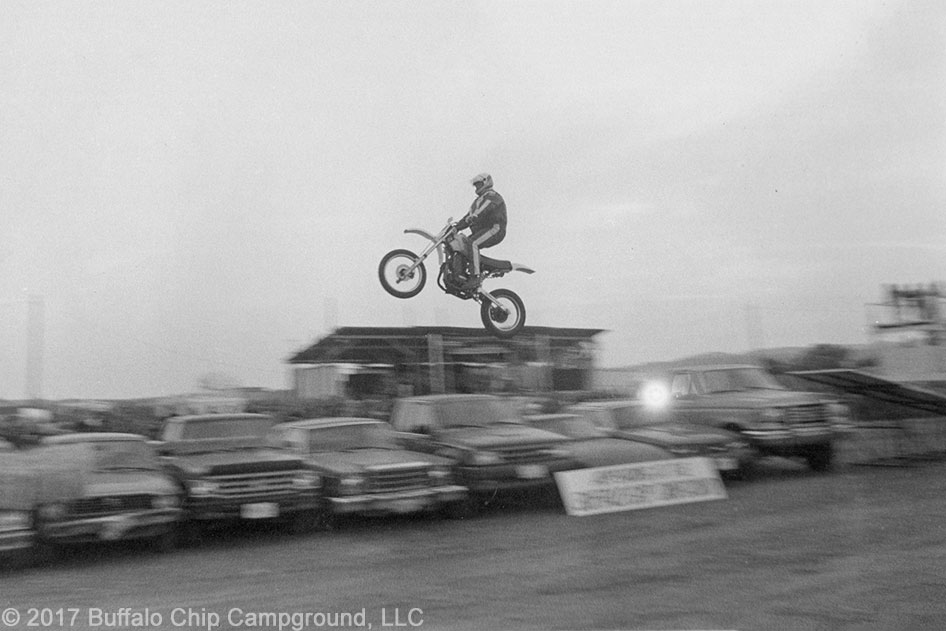 Beckley drew a crowd of over 5,000 people in the middle of the day to watch him jump over 10 pickups and cars on his Harley Rotax 600 in the Buffalo Chip amphitheater.

In the early ‘90s, the Chip organized a series of annual bonfires so monumental that they would live on forever in infamy—The Junk Bike Meltdowns. This short-lived tradition went out with a blazing grand finale in ’92 when Big Ed Beckley jumped his bike over the top of the burning pile.

The Chip used Fred Sibley’s 10,000-horsepower jet dragster to melt a stack of junked motorcycles and cars, and Beckley planned to jump 100 feet over the top. This distance between ramps was an enormous, considering Beckley weighed nearly 400 pounds at the time! Fire and shrapnel bounced off his back and helmet as he flew through the 2,000-degree blaze, but the motorcycle daredevil was unharmed.

Some called him “The Road Warrior;” others called him “Jesus.” But on the day he flew through an outhouse filled with flames and feces, the one thing nobody called Robert Foley was “chicken.”

Foley made sure his motorcycle stunt was the real deal by enlisting volunteers to fill the shithouse and plant one and a half sticks of dynamite underneath the infamous, foul-smelling inferno. “I’ve had over 200 volunteers to shit in it already,” Foley proudly exclaimed prior to the jump. Despite poor odds, Robert Foley blasted through the target painted on the side of building and became a champion that would live on in Chip history forever. 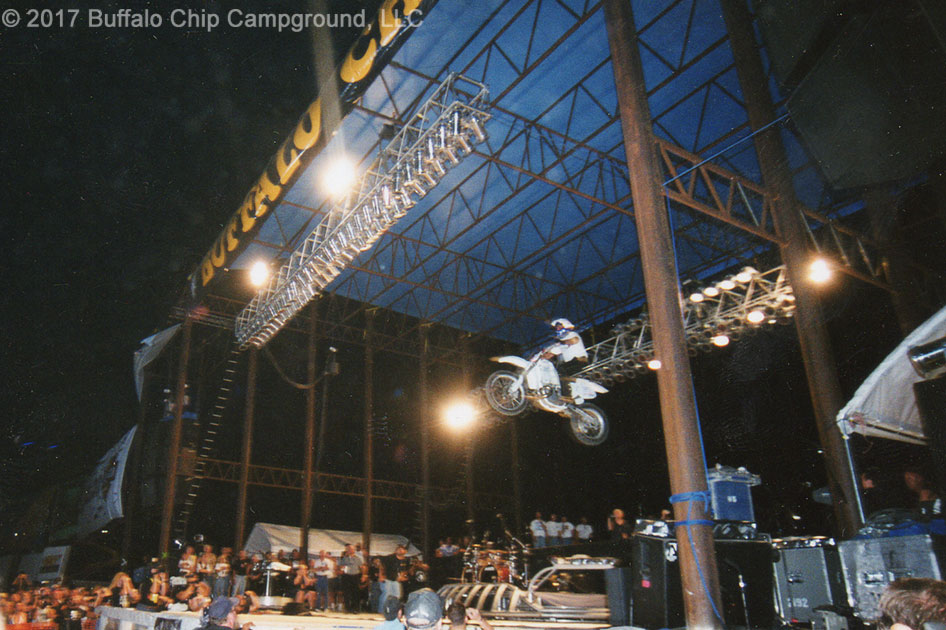 Robbie Knievel, son of the legendary Evil Knievel, made headlines when he jumped over the Buffalo Chip’s enormous Wolfman Jack Main Stage on Wednesday, Aug. 9, 2000. Many daredevils had asked to do this jump before, but none would dream of attempting the feat without a landing ramp the way he did.

Knievel did not practice the stunt, despite the risks and the need to avoid concert lighting set up for that night’s Styx and REO Speedwagon performances. The motorcycle daredevil instead spent the day leading up to the jump building his starting ramp using a set of indefinite blueprints and some 2x4s and 2x6s.

The crowd watched in amazement as Knievel soared through center stage, landed on the ground and went crashing into a pile of hay bales he had stacked against the front of house. Knievel cracked several ribs, but the thrill of the jump gave him the juice needed to hang in there with Chip fans for the rest of the evening.

Robbie Knievel took motorcycle stunts to the limit once more by successfully completing a world record jump over 100 Harley-Davidsons inside the Buffalo Chip amphitheater to commemorate Harley-Davidson’s 100th Anniversary. Harley owners each paid $100 to park their ride in the 100-bike lineup, and the Buffalo Chip donated proceeds to the Children’s Craniofacial Association. 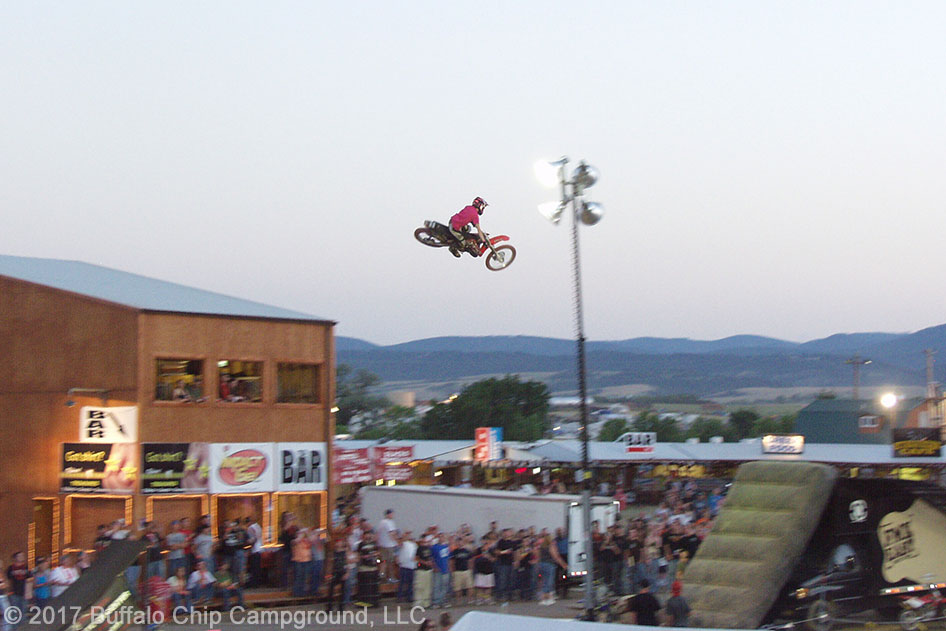 Freestyle Motocross riders soared through the air stories about the crowd in the Buffalo Chip’s Wolfman Jack amphitheater. 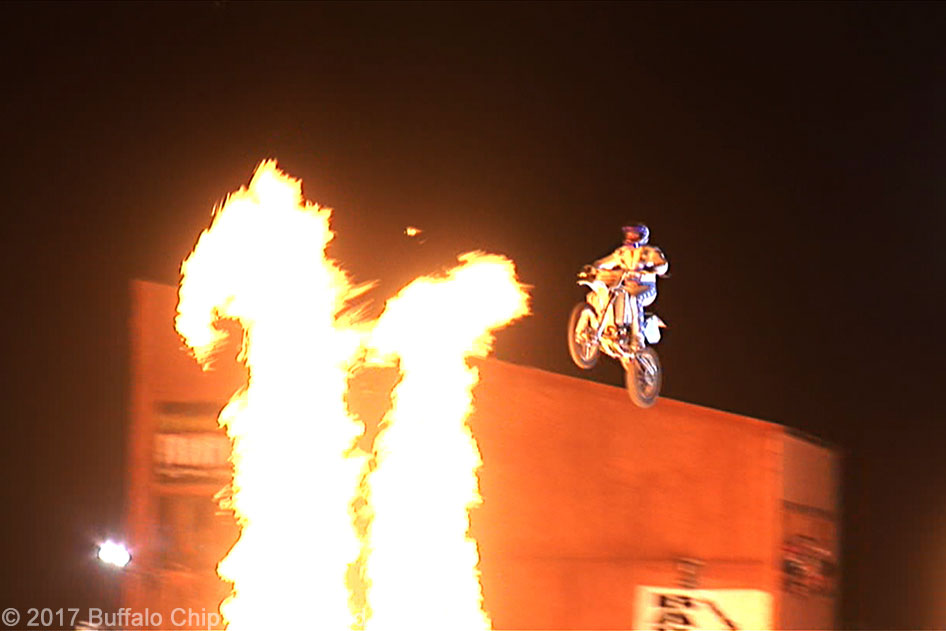 During the 2007 Sturgis Rally festival, Knievel thrilled crowds when he cleared 205 feet in the amphitheater, jumping through flaming towers of pyrotechnics.

Juli “The Dare Factor” Moody literally risked life and limb by attempting to perform her Human Link stunt for long enough to break the world record. This Olympic female lifter used the sheer strength of her massive biceps to hold in place two motorcycles as they burned out in opposite directions, and she beat the record by holding on for a jaw-dropping 1:05.01! 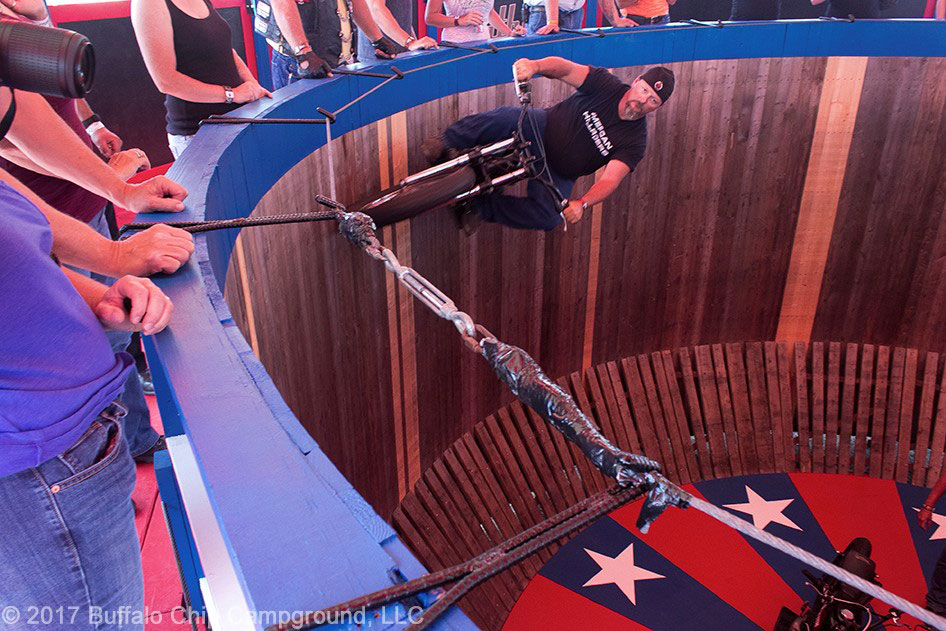 The motordrome returned to the Buffalo Chip in 2013 for Daredevil Wednesday. Patch McGillicutty came up short in his attempt to break the Guinness Book World Record speed of 90 mph on the Wall of Death, but he still made spectators’ heads spin at 71 mph! 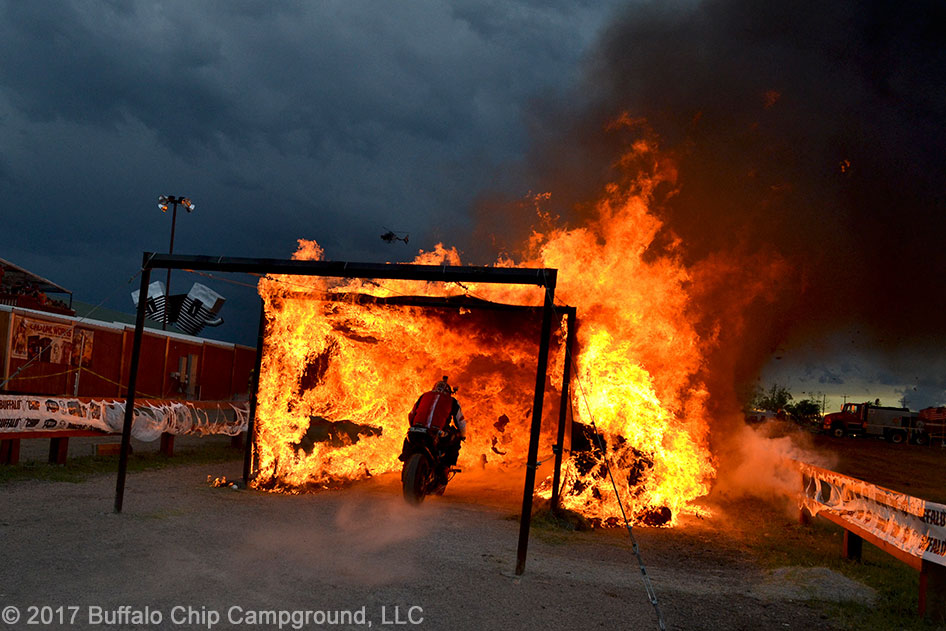 Fans crossed their fingers and held their breath when motorcycle daredevil Clint Ewing attempted to break the Guinness World Record for longest motorcycle ride through a tunnel of fire on Daredevil Wednesday. The record to beat in the tunnel was 338 feet; and in case the scorching 2,900-degree temps weren’t enough for Ewing, he had the added pressure of knowing his insane ride would be broadcast on live on national television! 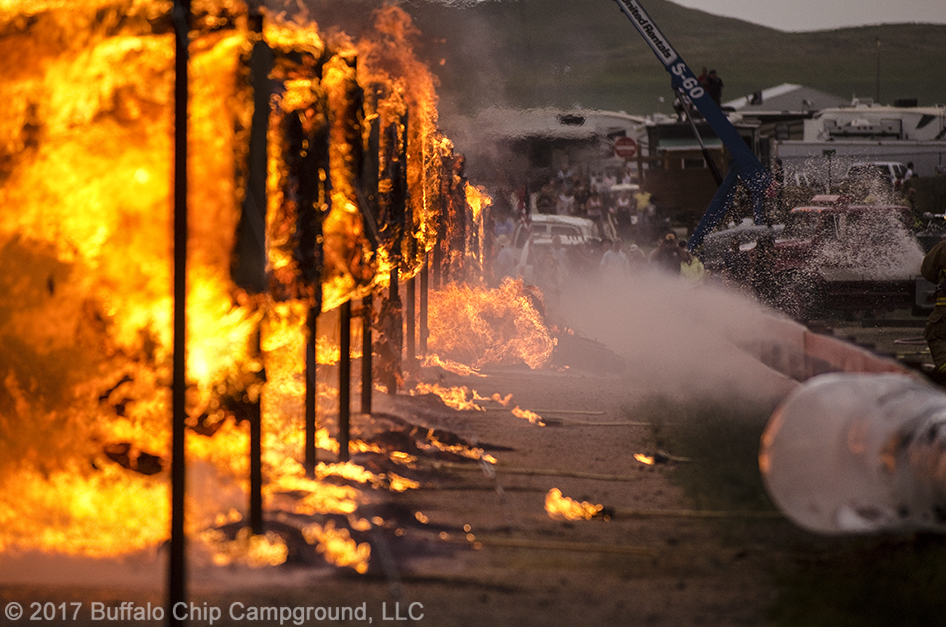 Miraculously, Ewing crashed out the side of the tunnel just seconds after he entered. 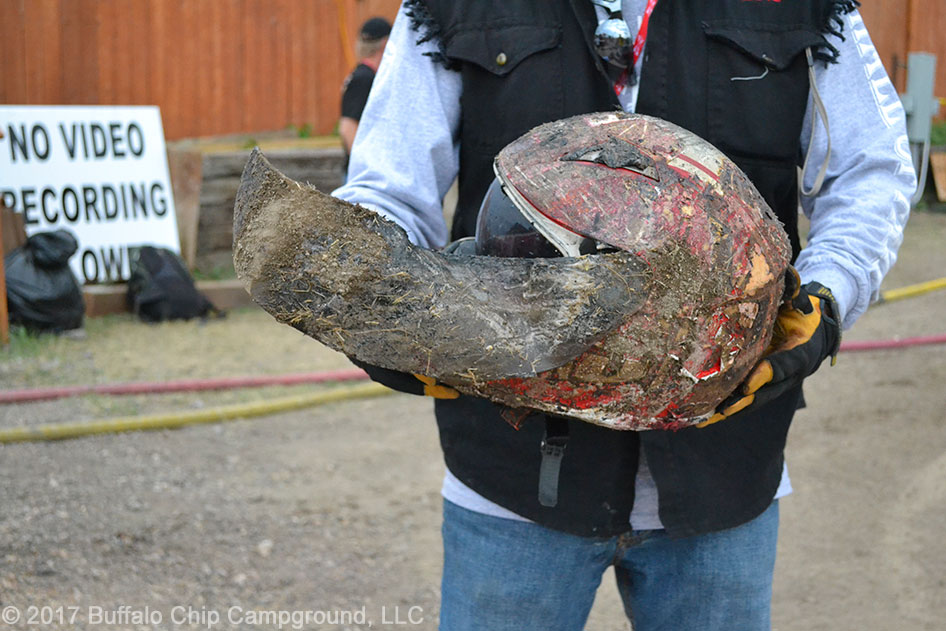 The tunnel’s scorching heat melted a portion of Ewing’s helmet and gloves. 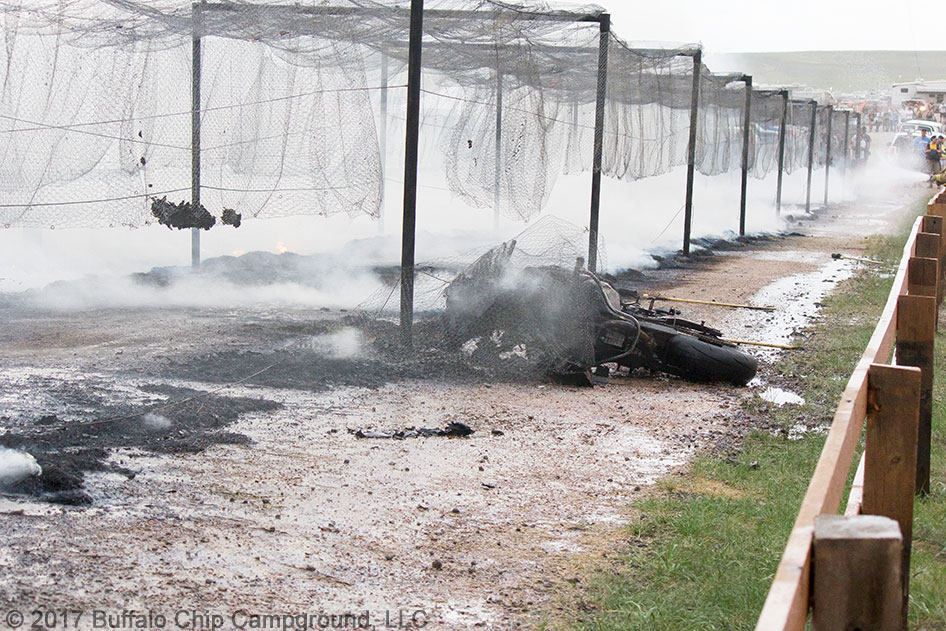 Ewing’s bike laid smoking in the place where it crashed long after firefighters had extinguished the flames. The motorcycle daredevil sustained third-degree burns on his hands and back but was able to make a full recovery.

There was no telling what would happen to daredevil Doug Danger when he attempted the insane 22-car jump the great Evel Knievel was never able to complete on Knievel’s® vintage 1972 Harley-Davidson XR-750. The only certainty was that the outcome would forever change motorcycle stunt history!

In a terrifying display of courage, Danger roared down a dirt path between packed campers, under a steel bridge, up an engineered ramp and over the 22 cars set along the main street through the center of the Sturgis Buffalo Chip amphitheater. The back tire of the 40-year-old Harley bit the edge of the landing ramp and stuck after a quick bounce. Danger just barely missed the edge of the decking surrounding the Chip’s famed Top Shelf bar where onlookers gasped at the daring feat from just 20 feet away.

The roar of motorcycles in the Buffalo Chip amphitheater is about to be drowned out by the sound of your own heart beating wildly out of your chest and the rattle of some extremely deadly rattlesnakes. If all goes to plan on Thursday, Aug. 10, you’ll see celebrated stuntman Doug Danger attempt to complete one of Evel Knievel’s earliest failed jumps. This motorcycle daredevil plans to fly 120 feet through the air on a 1972 Harley-Davidson XR750 over the top of a holding tank containing up to 2,000 vicious, venomous vipers. But if the plan fails, this could be deadly.

What kind of crazy risks have you seen riders take at past Chip parties? Let us know in the comments below!

Editor’s Note: This article was originally published Feb. 19, 2015. It has since been updated to include the most up-to-date information. 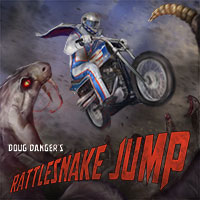 Presented by the Sturgis Buffalo Chip®
If you’re ready to ride free and take risks during the next rally’s, look no further than the Sturgis Buffalo Chip. In 1981 the Chip became the world’s first entertainment destination created By Bikers, For Bikers, and they’ve been taking risks to the limit ever since.Reserve your passes now so you don’t miss out on the chance to experience the mother of all motorcycle stunts at the Chip during this historic year.