The Biker Chronicles: How the Motorcycle Culture Began

Ever wonder how the whole biker lifestyle got its start? Well, it began with servicemen returning from World War II who bonded together over the love of motorcycles. You see, by 1934 out of nearly 300 American motorcycle companies that were created from around 1900, only two remained in business, Harley-Davidson and Indian. At the depth of the Great Depression, Harley-Davidson pulled out all the stops to stay alive. Luckily, they continued to sell motorcycles to the police departments across the country.

Over at the Indian motorcycles camp, the new President, Mr. du Pont was fighting to survive and doing an amazing job. In fact, each year after 1929 saw the deficit at Indian reduced by as much as half. In 1934, the AMA created a new Class C in racing for 750cc, or 45 cubic inch side valve engines. This quickly gave birth to the Indian Sport Scout and the Harley RLDR. In 1935, Harley had Joe Petrali on the Factory Team, and Smokin’ Joe won all of the national titles that year. 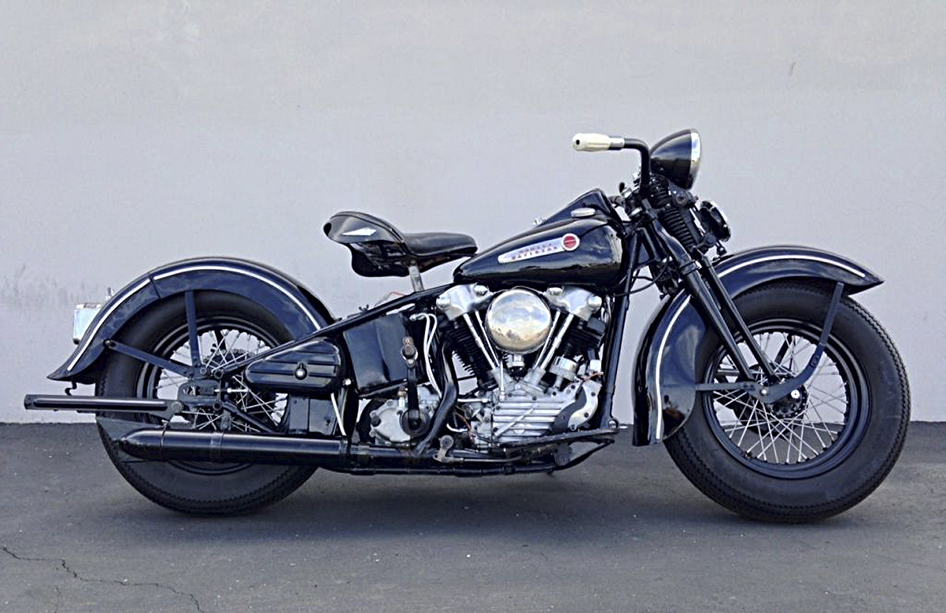 Another major victory for Harley-Davidson loomed over the darkening horizon: the specter of World War II. Since the late ’30s, the U.S. government had been giving Indian and Harley ever-growing orders for military motorcycles. These bikes were for war preparedness at home and to supply our allies with bikes since the British motorcycle industry had been all but destroyed by the German air campaign. 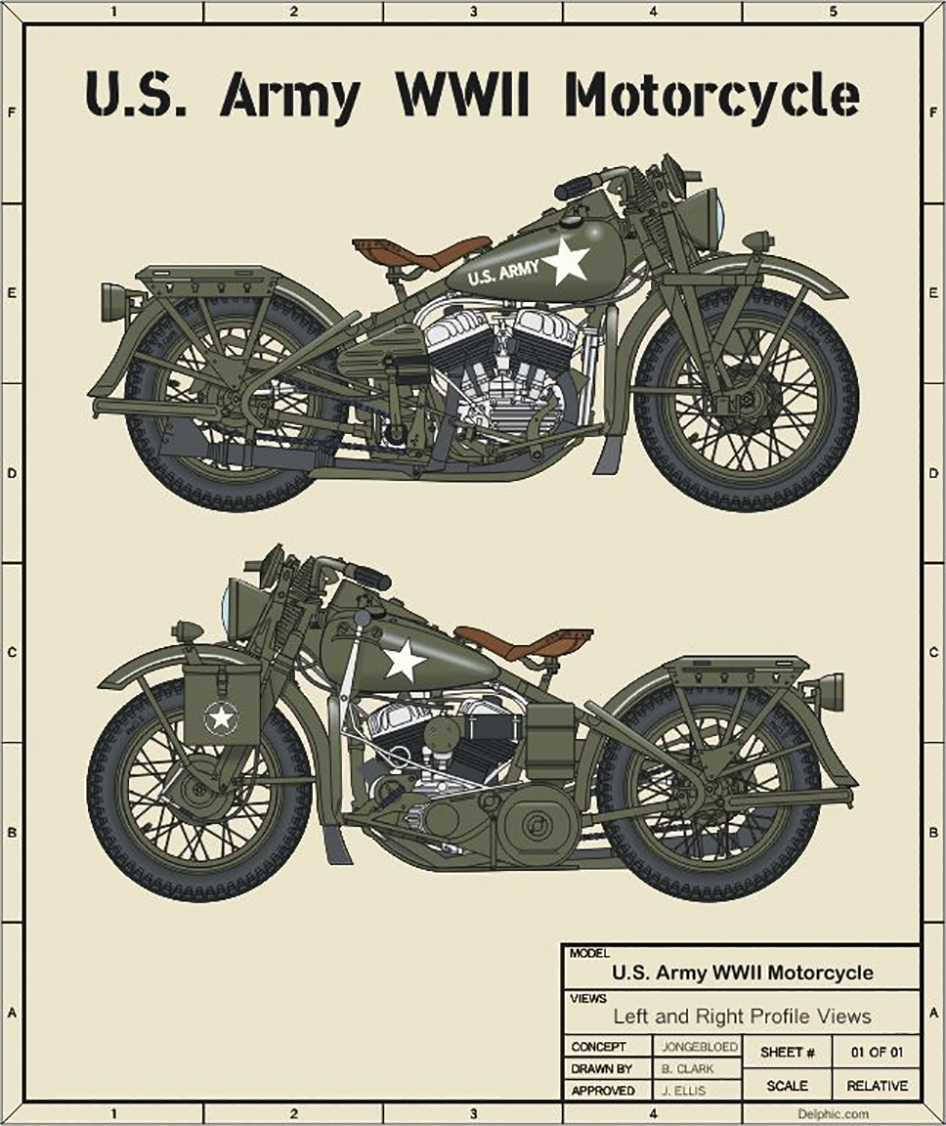 As America entered the war, so did Harley-Davidson, and it entered it in a big way. In 1941, literally all of Harley’s motorcycle production went to the war effort. When WWII ended in 1945, motorcyclists stateside wanted a new Harley to replace the one that carried them through the war years, and returning G.I.s were aching to buy a civilian model of the bike that saved their asses time and time again in Europe. This created a loyalty to Harley-Davidson that Indian couldn’t touch. It also gave birth to more than a little rivalry between Indian and Harley riders. By 1945, Indian was only producing its Chief model. 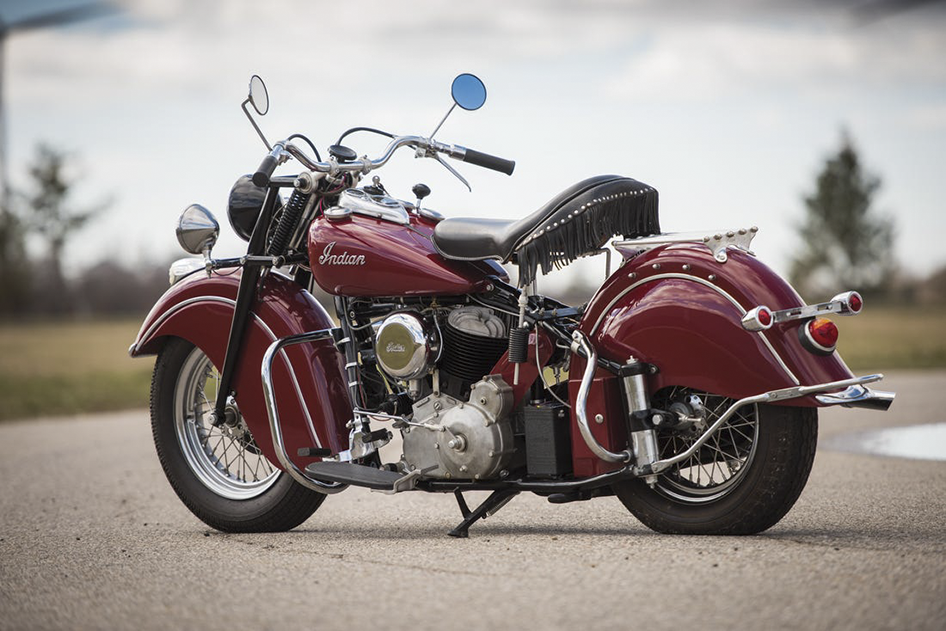 Remember that this was a time when motorcycle clubs were fairly clean-living groups who rode wearing dapper ties and snappy caps. In fact, you could be fined for forgetting to wear your tie to a field meet. The Detroit Hell’s Angels even won the AMA Award for Safety. These forerunners are no relation to today’s “Hells Angels” (note that the notorious bike club we are all familiar with does not use an apostrophe in their name). The one percenters of Hollywood biker movie fame weren’t on the scene…yet.

As Indian fought valiantly with their new Arrow and Scout models in 1948, not even the fact that they had such Indian-riding celebrities as Jane Russell and Roy Rogers could help them when Harley came out with its new 74 cubic inch Panhead motor. The innovative design featured hydraulic valve lifters and aluminum heads.

In the summer of 1946, a handful of American War Veterans and their friends were sitting in the All American Bar in South Central Los Angeles, California. The place was an old gas station with a bar attached in back. It was tiny and kind of a dive. Most of the guys hanging out had two things in common: they had been through the war, and they loved to race around on motorcycles. The “Big A”, as patrons called the place, was a destination for bikers and if you weren’t a Vet or into bikes you had no business there.

Some of these guys had been riding motorcycle together since 1939, calling themselves The Characters. Well, Wino Willie Forkner, J.D. and his brother Jim Cameron, Jack Lilly and a few others were havin’ several cold ones and trying to come up with a name for their group of riders. Willie had been thrown out of another motorcycle club for getting drunk and sneaking into an AMA-sanctioned race, causing a scene.

As the legend goes, one of the bar’s patrons, one Walt Porter, was sitting very drunk with his head on the bar, half-listening to all the talk about names for a new bike club. He is said to have raised up his head and uttered, “You might as well call yourselves the Boozefighters, ’cause all you ever do is sit around the bar and fight that booze.” The name stuck and the Boozefighters were born. Certainly, many motorcycle clubs had come before, but the original Boozefighters and those clubs that came after them marked a change in the evolution of motorcycling because they became associated with the term “outlaw biker.”

When you think of the image of an outlaw biker, most in the straight world think of a gorilla stuffed into a leather jacket holding a length of motorcycle chain as a weapon or a Wild West gunslinger when they hear the word “outlaw.” The fact is, the term “outlaw” referred to the fact that outlaw bikers were those who did not race at AMA sanctioned field meets. Simple as that. They were outside the convention of the AMA’s rules and regulations and therefore “bad boys.” 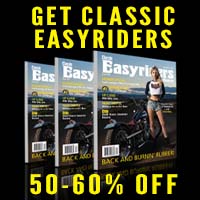 Be a part of the biker brotherhood and sisterhood that began over 50 years ago and save over 50% on the cover price with a subscription to America’s “Biker’s Bible.” Every sizzlin’ 100-page monthly issue brings you killer custom motorcycle features; wild runs, rallies and biker parties; hot new parts and accessories; tech tips you can really use; interviews with biker legends; and classic biker lifestyle art by David Mann.

Enter Coupon Code YESCHIP and get a FREE Wall Tapestry of the Captain America Bike.